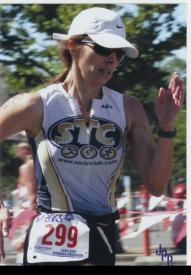 From the State Hornet:

“I ran faster after that moment. My energy was renewed, as if I had just started the race,” said O’Kane, who recently came back from the championships in Budapest, Hungary last month. “I felt so proud to be representing my country, the United States of America. The feeling brings tears to my eyes. That meant so much to me.”

Despite having contracted Lyme disease, a tick-borne illness infecting the bloodstream, a few years ago, O’Kane is determined not to let her illness get in the way of her doing what she loves.

In the past two years, O’Kane, who was afraid of heights, has climbed the 8,000-foot-high Yosemite National Park’s Half Dome. She has also competed twice in triathlon championships, with the second one held last month.

“Lyme disease is often misdiagnosed. At first doctors told me I had ALS (Amyotrophic lateral sclerosis), an incurable neurological disease, and told me I only had a few more months to live,” O’Kane said.

Read the rest of this article here.