TOUCHED BY LYME: (guest blog) Poppy seeds are much easier to spot than nymphal ticks 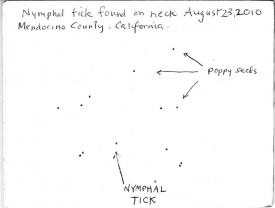 Phyllis Mervine, president and founder of the California Lyme Disease Association, recently felt a tickle on her neck…and found a nymphal tick. Knowing that nymphs are often compared to poppy seeds, she collected some poppy seeds from her garden and put them on the same card with the tick. The picture which accompanies this blog is a photo of the tick and the poppy seeds. Here's her account of the episode.

Recently I was outdoors trying to fix my garden fence where the deer are jumping over. I was walking barefoot in the tall grass where they had made a trail along the fence. A few times I reached down to pick up some branches off the ground to stick into my fence, to make the fence higher and discourage the deer.

Although the hills are quite golden and dry, under the oak trees it has been a bit damp and some of the shorter grasses are still green. Still, it is definitely not tick season, and usually we don’t expect to see nymphs past July and adults start to appear with the first rains in the fall.

I came in to dinner and while we were eating, I felt a slight tickle in the middle of my back. I asked my husband Fred to look. He lifted my shirt and inspected my skin. Nothing. He couldn’t see anything. I thought it was my imagination.

A bit later, I was back at my desk when I felt a tiny tickle up by my shoulder. I scratched at it but found nothing. Once you start thinking about ticks, everything tickles, it seems.

A while later, I felt a tiny tickle on the side of my neck. I licked my finger and tried again. This time I found something. It was so small I could barely feel or see it. I put it on a piece of white paper, took it under a strong light and got out my magnifying glass. There it was, a tick. It was so small I could barely make out four legs on a side. It was moving! I quickly stuck a piece of transparent tape over it.

Then I thought of how we call nymphal ticks “poppy-seed sized.” Is it really? Poppy seeds have got to be smaller than this, I thought. Luckily, I have poppies in my garden, now dried to seed shakers. I grabbed a flashlight and went outside, tipped over a poppy shaker and brought some seeds in. I sprinkled them onto the white piece of paper next to my tick.

The seeds actually were larger and easier to see than the tick! I was astonished. At fairs people are always surprised to see how small they are. No matter how many times they have heard, “Nymphal ticks are poppy-seed sized,” they always say, “My god! They are so small!” Not only are they small, they are not as black or defined in shape as the poppy-seeds. Besides, they are flat and cling to the skin. How are we supposed to avoid these things?

I went down to take a shower, and scrubbed every place I could reach with nylon netting. I washed my hair. I didn’t think I had another tick, and even if I did I knew this might not dislodge it. But what else can you do?

What if I had gone to bed instead of staying up late to work on my Lyme projects? By the next day the tick would have been happily nestled in my hair, feeding it little self and giving me whatever nasty pathogens it harbored in its tiny gut. Next month or the month after, maybe I would have come down with headaches or facial paralysis or Parkinson’s or MS – all diseases that can be caused by Lyme!

We need better treatments! We need a cure! CALDA is in the forefront of national advocacy for Lyme, fighting for patients’ freedom to choose. If you haven’t already, please support CALDA’s research program by donating on our Lymewalks site. Better yet, join my team (I named it Ukiah Tick Busters) by setting up your own fundraising page and sending it out to all your friends. The wider the net we cast, the more money we raise, the more progress we make.

Mark Sept. 25 on your calendar and I hope to see you at the first Ukiah CALDA Lymewalk!

ps Entomologist Robert Lane PhD identified the tick and said it was a “dermacentor.” Dermacentors in California carry a disease like Rocky Mountain spotted fever but probably not Lyme.