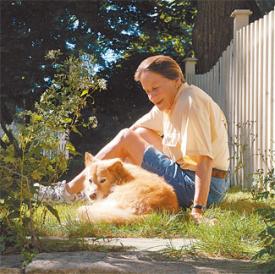 Babesiosis, which people sometimes contract from the same tick bite that gives them Lyme disease, appears to be on the increase in CT.

From the Ridgefield Press (CT)

Neeka’s patience was tested this summer.

The nine-year-old Sato dog and her owner, Nancy Boersma of Ridgefield, had never missed their daily walks. But for five consecutive weeks, Neeka waited as her owner battled a serious yet mysterious illness that robbed her of almost an entire summer.

The culprit? A single, minuscule tick.

“I did have a rash, but when I saw it I said ‘it can’t be a tick because it didn’t irritate me,’” said Ms. Boersma. “I figured it must have been a different bite.”

So she did what any unsuspecting victim would: waited for the bite to heal itself.

After a week of feeling progressively worse, a doctor diagnosed Ms. Boersma with Lyme disease and prescribed antibiotics. However, this light at the end of the tunnel was a mere illusion.

“I was tired, fatigued, I had less and less energy and it was a struggle to get from one place to another,” said Ms. Boersma. “People told me ‘you have to wait until the antibiotic kicks in,’ and that was the answer if I mentioned to anybody that I was feeling worse.”