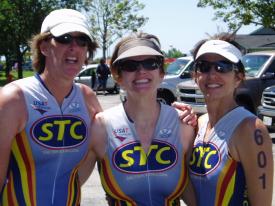 After almost dying from Lyme disease, Pamela O'Kane will run, swim and bike in world class competition in Budapest, Hungary.

In the spring of 2006, Pamela O’Kane was a 45-year-old lecturer at Cal State Sacramento, happily training future teachers in the School of Education. Her own kids were grown, and she spent a lot of her non-work hours in athletic pursuits–running, swimming, biking. She often raced with her sisters Colleen and Denise. Life looked good.

Then, weird stuff started happening. She began losing weight and muscle mass. She developed facial pain, jaw problems, difficulty speaking. Then trouble walking, twitching in her face, tingling in her arms and legs. Her doctors variously thought it might be MS, Guillain-Barre, or ALS. They could do nothing to help and her condition continued to deteriorate. By early December, there was doubt she’d live to see Christmas.

Then, O’Kane developed an ear infection, for which a doctor prescribed antibiotics. The medicine cleared up more than her ear problem. Suddenly, her whole body felt better. Within a week, she took part in a 5K race. (“Didn’t do very well,” she said. “But I crossed the finish line.”)

Although her physical progress didn’t last, the incident provided an important clue. Her mother and sister researched on the internet. What medical condition mimics MS and ALS, and can be affected by antibiotics? The answer they stumbled upon: Lyme disease.

In early 2007, O’Kane saw a Lyme specialist in the bay area, who began treating her not only for Lyme, but for several additional tick-borne diseases as well. It was not an easy road. There were episodes of muscle seizures, speech difficulties, and generally feeling horrible. There were ups and downs in finding the right medications–some would help for a while, and then seem to lose their effectiveness. She spent time in a hospital, and then needed to re-learn how to walk.

It was during this time she knew she needed a goal to focus on, something to keep her going through the difficult days. One day, she decided to start training to climb Half-Dome, the rocky peak in Yosemite National Park. She kept that image in her mind, as she worked through the hard, hard times of Lyme treatment. In August 2008, she accomplished that goal.

This weekend, she’s flying to Budapest, Hungary, once again with Team USA, to compete in the ITU Triathlon World Championships. Her category is Women age 45-49. She’ll do the Aquathon–a run/swim/run event, and the Sprint/Triathlon–a swim/bike/run event.

It would be tempting to assume that O’Kane’s health problems are behind her. Surprisingly, that’s not true. While Lyme treatment helped immensely,she still must cope with residual neurological difficulties.

“I make involuntary moaning sounds while I’m running–can’t help it,“ she says. “And I often have lots of shaking and trembling. I get strange looks from the other athletes. But you know what? That’s their problem, not mine.”

O’Kane has a message for other Lyme patients: “You can fight this disease. It’s hard, but you can do it.“

O’Kane will compete in Budapest on Sept. 8th & 11th, and then do a bit of sightseeing with her traveling companions. (“None of this put-off-until-tomorrow stuff anymore. I want to travel now!”) She’s planning to return in time to join the Sacramento Lymewalk on Sept. 25. (11 a.m., McKinley Park, 601 Alhambra Blvd.)

If you’re in the area, won’t you come, too? It’s a chance to hear O’Kane’s story and join with others working to raise public awareness of Lyme disease.

The 2010 CALDA Lymewalks are six events throughout the state in September and October.