NEWS: Autopsy shows Australian man in fact had Lyme. Widow to sue government over continual denial of Lyme in that country. 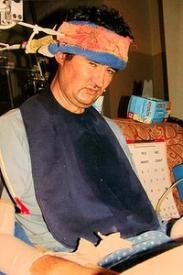 A Sydney woman will launch a class action against government health officials after autopsy results showed her husband had been riddled with a disease the Health Department says does not exist in Australia.

A SYDNEY woman will launch a class action against NSW Health after autopsy results showed her husband had been riddled with a disease the Health Department says does not exist in Australia.

Karl McManus, 44, died in July after being bitten by a tick while filming the television show Home and Away in Sydney. The autopsy indicated he had bacteria from Lyme disease in his liver, heart, kidney and lungs.

Samples from his organs, which were tested at the Sydney laboratory Australian Biologics, will be sent to the University of Sydney and to laboratories in the United States for more testing. ”If there is duplication of results, the government cannot dispute [that Lyme exists in Australia],” his wife, Mualla Akinci, said.

Mr McManus, from Turramurra, was diagnosed with multifocal neuropathy after testing negative at an Australian laboratory for Lyme disease, but tests carried out in the US and Germany returned positive results. NSW Health maintains that the organisms which cause Lyme disease – three species of the genus Borrelia – are not carried here by wildlife, livestock or their parasites.

Previous articles on this topic:

Lyme Mystery Ticks all the boxes