TOUCHED BY LYME: Ticks in the snow 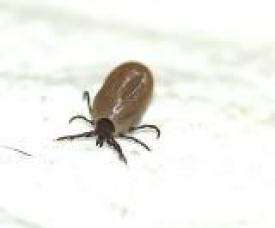 The photo to the left is an engorged Ixodes Pacificus, otherwise known as the western black-legged tick, notorious carrier of Lyme disease, sitting on snow one November day in Shingletown, California. The picture was snapped by professional photographer Michelle Mahood, moments after plucking the insect from her dog, who had been frolicking in the snow. It’s Michelle’s answer to all those medical professionals who perpetuate the delusion that ticks are never a problem in winter.

Many folks with Lyme disease have no interest in ever getting up close and personal with a tick again in their whole lives. Which makes Michelle’s story all the more surprising. Although she has been dealing with tick-borne infections for a number of years now, she’s made a project out of photographing ticks.

She explained in an email: “Even though ticks disgust me and have given me diseases (Lyme and babesia duncani, to be exact), I can’t say that I’m not equally fascinated by them, with a desire to know what they look like up close and be able to differentiate between their species. Also I felt it might be educational to others — particularly since I’ve heard (from doctors, including local neurologists) that there are no ticks here, or if there are, then there’s no Lyme disease in our area….The tick population in my area is so dense I needn’t seek them out, they find me.  They are present year round, seemingly impervious to even the cold winters we have here.”

Like many others who eventually turn out to have Lyme disease, for several years Michelle experienced a wide variety of painful symptoms that her doctors could neither explain nor alleviate. From her own research, Michelle came to suspect Lyme, but that idea was pooh-poohed by her neurologist. Once she found a Lyme-literate doctor, she ended up testing CDC-positive for Lyme. Her daughter turned out to be CDC-positive for Lyme as well. Michelle reports that treatment has helped both of them, though some health issues remain.

In the interest of educating the public about ticks and Lyme, Michelle has posted her pictures on a website for easy viewing. In addition to the ticks, there are photos of  a wide variety of other interesting insect as well. Turns out Michelle is also a fly fisherman.

She explains it like this: “Fly fishermen are endlessly fascinated with tiny bugs in their never-ending quest to tie the perfect match for whatever trout are eating at the moment.  Toward that end I have amassed a gallery of photos of bugs – mainly macroinvertebrates.”

For those who can’t bring themselves to look at bugs of any kind, Michelle is also a wedding photographer. A portfolio of beautiful wedding pictures can be viewed here.

Comments? Email the author at dleland@lymedisease.org.