LYMEPOLICYWONK: Saying what you mean and meaning what you say: Evidence, Science and the IDSA 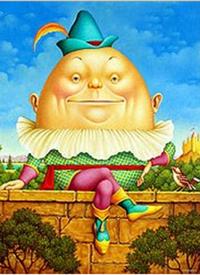 Some people don’t think that evidence-based medicine is about evidence. They think it is about power and ownership. I was a bit stunned to read Cerar et al (coauthor Dr. Wormser) take on the author of a meta-analysis on Lyme disease by boldly declaring that her conclusion was “not evidence based.” Kind of makes you wonder whether evidence is in the eye of the beholder and whether Cerar and Wormser have authority to settle scientific debates by proclamation of what constitutes “evidence”. Much as a scornful Humpty Dumpty did in Alice in Wonderland: "When I use a word. . ., 'it means just what I choose it to mean – neither more nor less." "The question is," said Alice, "whether you can make words mean so many different things." Does scientific debate really boil down to WHO says and how LOUDLY they say it? Should it? More after the jump.

The controversy was kicked off by an article in the American Journal of Medicine by Cerar et al “Subjective symptoms after treatment of early Lyme disease.”    The premise of the article is that patients with Lyme disease do not develop any relapsing, persistent, chronic symptoms that can be considered to be due to persistent infection.  The article drew flak from three separate letters to the editor, one by Dr. Sam Donta, one by Dr. Stricker and I, and one by Dr. Cairns, all taking issue with the fact that the patients in the study were all promptly diagnosed and treated and could not be used to make sweeping generalizations about patients who are not promptly diagnosed and treated.  A survey by CALDA in 2005, found that diagnosis of patients with chronic Lyme disease was delayed for an average of 4.5 years.

Dr. Cairns had previously published a meta-analysis of 5 studies and found that patients with Lyme disease were more likely than controls to have fatigue, musculoskeletal pain, and neurocognitive difficulties years after diagnosis with Lyme disease.  One has to wonder what exactly about a meta-analysis is not “evidence based”?  Their point?  That her studies included patients that did not meet the CDC surveillance case definition.  Oh. . ., that.  But wait, didn’t the CDC say that the surveillance definition of Lyme disease should not be used to diagnose patients—that the diagnosis should be made clinically?  Then, doesn’t it follow, that Cairn’s use of clinically relevant patient populations—those diagnosed with the disease—is the better approach?  Or, is the definition of Lyme disease “just what [Wormser and Cerar] choose it to mean—neither more nor less”?