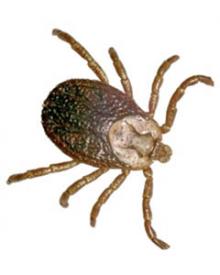 Sacramento News & Review reports on a recent case of tick-borne tularemia in a local eight-year-old boy.

From the Sacramento News & Review:

According to Dr. Glennah Trochet, the Sacramento County public health officer, the child was bitten by a tick in mid-July and became ill with what was later identified as tularemia.

The disease, also called “rabbit fever,” is carried by the common dog tick, the sort that owners pick off Fido without a thought. It can cause serious illness, including a nasty sore at the bite site and symptoms that mimic almost every other illness: fever, swollen glands, inflamed eyes, sore throat, mouth sores. Worse symptoms include diarrhea and pneumonia.

According to Trochet, after the Folsom child became ill, the Sacramento-Yolo Mosquito & Vector Control District collected ticks in the area where the child was bitten and found several that had the bacteria that causes tularemia, Francisella tularensis. “We can be fairly certain that the ticks are in other parts of the area,” she says.