NEWS: Australian family sick with disease that "doesn’t officially exist" in their country 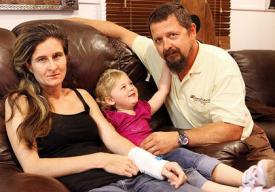 The mother of the family, once a wildlife officer, has had more than 300 tick bites, and tests positive for Lyme. Her daughter appears to have been born with the disease, and her husband shows symptoms (though his test results are equivocal.) Authorities maintain "there's no Lyme in Australia," making the family fight for recognition and treatment.

Battle against disease – and scepticism

Officially, the illness stalking a family does not exist here, writes Julie Robotham.

THE soles of Matilda Young’s feet hurt and she has trouble catching her breath after her frequent coughing attacks. At night, she drenches her bed with sweat.

But the disease with which the three-year-old has been diagnosed does not exist in Australia, according to the Health Department, leaving Matilda and her parents alienated and battling for recognition and treatment.

The Coffs Harbour family is at the sharp end of an academic battle over Lyme disease, a bacterial infection spread by ticks, which causes fever, headaches and a rash and can travel to the joints, heart and central nervous system if untreated.

Natalie had hundreds of tick bits as a National Parks and Wildlife Service officer.

Officially, no case has been transmitted in Australia and the organisms that cause it – three species of the genus borrelia – are not carried here by wildlife, livestock or their parasites.

But the Youngs – mother Natalie has also tested positive and and father Steven’s test was equivocal – confound that dogma because they have not been to the United States or Europe, where Lyme is common.

Ms Young believes she was infected while working as a field officer for the National Parks and Wildlife Service. ”I was 100 per cent in the bush. I did a lot of bushland regeneration stuff,” said the 34-year-old, who can no longer work.