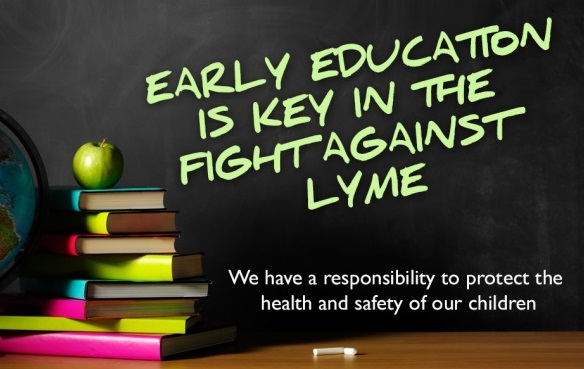 Legislation requiring the state to develop Lyme-education materials for school children has passed New York’s Assembly and Senate. The measure now goes on to the governor for signature.

ALBANY, NY—Senator Sue Serino (R, C, I—Hyde Park) announced today that her bill to create a Lyme Disease prevention and education program for school-aged children was given final passage in the Senate.

“Because our children spend so much time exploring the outdoors, and because they may not know how to identify a tick, let alone alert their parents should they find one, they are especially vulnerable when it comes to contracting Lyme and Tick-Borne Diseases (TBDs),” said Senator Serino, who Chairs the Senate’s Taskforce on Lyme and TBDs.

“Early education and prevention are key. These diseases are especially dangerous if they go undetected for long periods of time, so it is critical that we give our kids the tools they need to recognize a tick and teach them what to do should they find one. This bill is about empowering our young people by giving them the information they need to keep themselves safe when they’re enjoying the outdoors.”

The bill (S. 5804A) would specifically require the Commissioners of the Departments of Health (DOH) and Education, as well as the Department of Environmental Conservation to collaborate on developing age-appropriate instructional materials to promote education and awareness for school-aged children to protect them from Lyme and TBDs.

Senator Serino went on to explain that the bill was written in direct response to a demonstrated need in her local community, “Last year, I wrote to local school districts and offered free brochures on Lyme and TBDs for their students to take home and share with their families. The response was overwhelming—within days, thousands upon thousands of brochures had been requested. It is clear that there is a need for information on Lyme and TBDs in our schools and now, it is more important than ever to ensure that those materials are age-appropriate so our children can get as much out of them as possible.”

The bill which passed unanimously in the Senate is sponsored in the Assembly by Assemblywoman Didi Barrett.

“Raising awareness about the prevention, risks, and signs of Lyme and other tick-borne diseases is essential to fighting this devastating epidemic in our region and across the state,” said Assemblymember Barrett. “The impacts of Lyme can be debilitating and as we begin the summer outdoor season it is critical that people learn how to properly protect themselves.”

The bill has been sent to the Governor.