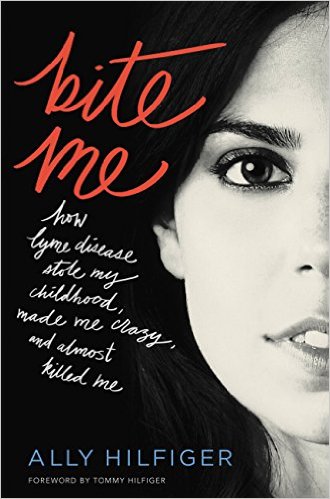 When Ally Hilfiger is about seven years old, she is bitten by a tick. However, nobody connects that fact to the series of changes that soon happen in her life. She develops terrible knee pain, memory problems, anxiety, learning disabilities and episodes of explosive anger, among many other symptoms.

Her parents—fashion mogul Tommy Hilfiger and his now ex-wife, Susie Hilfiger—take her to a parade of doctors, who variously diagnose her with “growing pains,” fibromyalgia, ADHD, and multiple sclerosis. Many treatments and therapies are tried during her growing up years. Nothing really helps.

As she recounts in her book, Bite Me: How Lyme Disease Stole My Childhood, Made Me Crazy and Almost Killed Me, somehow Ally still manages to go to school and take family vacations. She even snags a starring role in the reality TV show “Rich Girls.”

But while things might look okay from the outside, on the inside, she is in deep trouble. She suffers serious pain, fainting spells, and panic attacks. She self-medicates with marijuana, which relieves some symptoms, but can’t stop her from spinning wildly out of control.

At age 18, apparently suffering a psychotic break, Ally stands in her underwear smashing her mother’s favorite dishes and shrieking like a banshee at anyone who approaches.

Even in my crazy manic state, however, I knew there was something physically wrong with me and that no matter how hard I screamed, no one heard….Everybody was trying to reason with me, but it was as if we were speaking different languages: I was yelling, “Help me!” And they were saying, “It’s okay.”

That episode lands her in a psychiatric hospital for several months, where the folks in charge attribute her symptoms to abuse of drugs and alcohol. It isn’t until after she leaves the hospital that a psychiatrist comes to suspect that Lyme disease is the root her problems.

At that point, Ally’s story pivots. She finds a highly respected, Lyme-literate doctor who diagnoses her with Lyme and babesiosis and begins treatment. She experiences the miseries of the Herxheimer reaction, when dying spirochetes flood the body with toxins that make symptoms considerably worse. And eventually, she feels much better.

But it doesn’t last. “I would feel better on antibiotics, live my life and work, then crash a couple of months later and have to go back on antibiotics and stay in bed for long periods of time.”

Eventually, she tries other Lyme doctors, who each have a little different approach, and a variety of alternative healers, who employ such modalities as homeopathy, traditional Chinese medicine, Ayurvetic medicine and Reiki. And she meets the love of her life. And within that whole process, she finds what she considers true healing.

I think between the years of antibiotics, homeopathic treatments, detox diets, herbs, meditations, letting go of stress, and being in love, attempting to gain balance and happiness within myself might have seeped into my subconscious somehow. I felt healed. Maybe I would have to go through a few things here or there, but never would I ever have to be in fetal positions sobbing in agony, pain, confusion, or any other symptoms of Lyme disease….When my stomach, brain, or joints flare up, it doesn’t have to pull me into the pits of hell.

“Bite Me” is a riveting first-person account of what it’s like to be a young child—and then a teenager—with undiagnosed Lyme disease. Once Ally is diagnosed, the book describes her experiences with 12 different Lyme doctors and other healers. Ultimately, it talks about her “toolbox,” filled with spiritual and physical methods to help her get through anything the disease can throw at her.

Ally is using her experiences to help educate the public about Lyme disease. Here’s a YouTube of a recent interview on Good Morning, America.