TOUCHED BY LYME: Connecting the dots of Yolanda’s Lyme experience 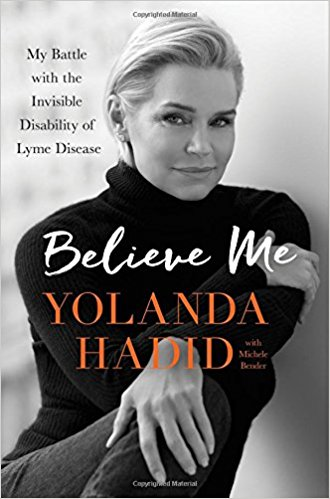 I first learned about the Lyme disease experiences of Yolanda Hadid (then known as Yolanda Foster) via Twitter.

At that point, Yolanda was a cast member of the “Real Housewives of Beverly Hills” TV show, a former high fashion model, wife of millionaire music mogul David Foster, and mother to three children who would themselves go on to high profile careers in modeling.

This re-tweet showed up in my feed in December 2012: 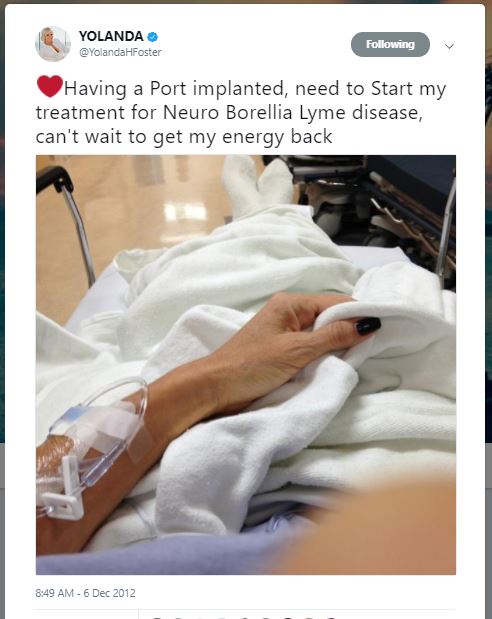 I admit, her story hooked me right away and I immediately started following her Twitter posts. Her tweets offered a trail of tantalizing bread crumbs. They alluded to hyperbaric oxygen, stem cells, hyperthermia treatments and various cleanses and detoxification protocols. Yet, details were non-existent. She never gave the reader any solid information about her symptoms, nor her wide and varied treatment protocols.

Eventually, she would write blogs for the Bravo website, in connection with the Housewives show. These occasionally mentioned Lyme disease. There were media interviews that spoke of some of her difficulties, and a brilliant speech at the 2013 Time for Lyme Gala in Connecticut.

But mostly, her story dribbled out as a string of cryptic comments on social media. They typically raised more questions than they answered.

Now, Yolanda has connected the dots for us in her book, “Believe Me: My Battle with the Invisible Disability of Lyme Disease.” (St. Martin’s Press, 2017)

It’s a compelling read. Lyme patients will identify with many of its elements: troubling physical symptoms that can’t be explained; a long, traumatic search for an accurate diagnosis, with plenty of missteps by top medical doctors; the difficulties of treatments, both traditional and alternative.

Not everything is something the rest of us might relate to, however. Before she gets sick, Yolanda and David Foster inhabit a glamorous, jet-setting realm, which includes her involvement with the “Real Housewives” TV show.

However, all that changes as her health fails and she must marshal every ounce of inner strength she has to save her life and her sanity.  Yolanda falls further and further away from the dazzling world of the entertainment industry, and eventually her marriage collapses as well.

Her willingness to keep searching for answers is a major theme of “Believe Me.” By this time, two of her children are also being treated for Lyme disease. She fights for their lives as well as her own. And in the midst of it, she loses her dear friend Ellie to the ravages of ALS—a severe emotional blow.

Through it all, Yolanda perseveres. She crisscrosses the globe to try out an astonishing array of alternative and ancillary treatments. She has metal-based crowns removed from her teeth and toxin-leaking implants removed from her breasts. She pursues the mystery of intestinal parasites, eventually expelling some gnarly looking rope worms. (Color photos included!)

I don’t view “Believe me” as a road map for Lyme disease treatment. Rather, it’s an inspiring description of her personal journey. Despite many twists and turns, it ultimately leads her to a good place.

I salute Yolanda for the grace, courage, and fortitude with which she endured an incredibly difficult stage of her life. And I thank her for so generously sharing what she has learned along the way.