TOUCHED BY LYME: Spreading the word about Lyme disease in Maine 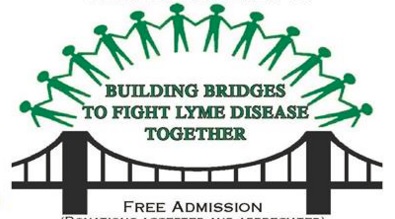 Wiscasset, Maine was quite the place to be yesterday. More than 325 people turned out at the Second Annual Midcoast Lyme Disease Support and Education Conference 2016.

The welcoming address was from TV anchor Sharon Rose Vaznis. She became interested in reporting about Lyme disease in Maine after she was approached by recovered Lyme patient/runner Angela Coulombe (who was also in attendence.) Vaznis says she received more audience response from that story than anything she’d ever reported before, and was contacted by Lyme patients all over the state–and the US–after it ran. She has continued to cover the story of Lyme disease in Maine.

Three state legislators–Rep. Deb Sanderson, Rep. Ryan Fecteau, and Senator Chris Johnson–were up next. They explained the story behind Maine’s recent successful bill to protect doctors who use long-term antibiotics for treating Lyme. (The legislators are shown in photo above.)

Pat Smith of the Lyme Disease Association gave an update on the state of Lyme and other tick-borne diseases; a panel of naturopathic doctors from Maine participated in a Q & A session; Maine social worker Jane Sloven, LCSW, introduced Sheila Statlender, Ph. D., a clinical psychologist, discussed the mental health practitioner’s role in assessing and treating tick-borne diseases; Bob Giguere, of IGeneX Labs, explained the ins and outs of testing lab testing for Lyme disease; and Dr. Daniel Cameron, immediate past president of ILADS, talked about evidence-based practice guidelines for treating Lyme.

And–ahem–I spoke about “How Lyme affects the whole family–even those who aren’t sick.” I used my book as a jumping off point, and included a lot beyond the parent/child dynamic.

I liked giving the talk, and I enjoyed even more the chance to speak one-and-one with so many individuals throughout the day. At conferences like this, I’m always struck by how hungry for information people are, both for themselves and for their loved ones. And how hard they are trying to conquer this insidious disease. And how appreciative they are for the opportunity to attend an education event like this one.

Kudos to event organizers Paula Jackson Jones and Angele Rice. You did a bang-up job!