We’re down to the wire. But I’ll give you some good news first.

Some of you know we have been encouraging people to call their senators about the Lyme bill, which may have a chance at passage (in some form) this week. If you haven’t yet, now’s the time!

We never know if people are actually calling unless they tell us, and few do. When I called, the aide wouldn’t tell me how many calls they had received. Once she said, “A few,” then she said, “Several.” Not too encouraging. But then “Elizabeth” sent this, and because it’s encouraging, I thought I’d share it with you.

Hi Phyllis,
I just wanted to let you know that I called both Boxer and Feinstein’s office. I was able to get thru and speak with a rep (both times) Boxers rep was very kind and told me he had numerous calls. I told him that I had a family member that had been very ill and how difficult it was to get help, acknowledgement and medical assistance. He shared that he had friends who were having difficulty with Lyme as well.. So I was hopeful. I will urge others to call in my family. How long do we have to still make calls?

The answer to her question is we don’t know exactly how long we have to make calls– it might be only a day, it might be two. Sen. Alexander will be making the decision and as far as we know, the committee has completed mark-up on the medical innovations bill we hope to add this as an amendment to. It could be any day. So people should call Monday first thing if they can.

Whenever it is, we want ALL our senators on board with amending it with the language in Sen. Blumenthal’s Lyme bill, S. 1503. WisconsinLyme’s 487 members, MassachusettsLyme 600+ members, GeorgiaLyme’s almost 300 and even NebraskaLyme’s 32 members. EVERYBODY needs to call or at least send an email!

We have thousands of folks in our online state groups. Each person should do this. Don’t hang back and think, “Someone else will do it!” If everyone did that, no one would call.

Here’s the link to find your senators’ phone numbers.

Write them down NOW. CALL first thing Monday. Tuesday at the latest. Or Wednesday if Monday and Tuesday were impossible!

Calls are quick and people say they are best. But if you want to send an email instead, our Voter Voice tool makes it simple. The message is already written for you but you can add to it or change it.

This is one thing I can’t do alone, nor can a handful of enthusiasts. This needs the massive participation of hundreds or thousands of patients—and your friends and family, if you can get them to do it. It means asking, and reminding, and asking again. We will let you know when the bill passes. If it does. It’s up to you.

When you call, here’s what you should say:

“Hello, I am a constituent of the senator’s and I’m calling about a bill that the Senate HELP Committee has jurisdiction over. The bill is the Lyme and Tick-Borne Disease Prevention, Education, and Research Act, Senate Bill 1503. I urge the senator to ask Chairman Alexander to add this bill to the medical innovation bill the committee has been working on so that it can be passed by the full Senate. Thank you.”

I would also urge all of you, regardless of your state, to call Senator Alexander’s office directly, even if you don’t live in Tennessee. His DC number is 202-224-4944.

Someone noticed this legislation does not allocate any funding. Of course Lyme disease needs serious funding. The federal government gives way less to Lyme with its over 300,000 reported cases per year, than to West Nile virus, with around 2,000 cases/year. Look at this chart used by our CEO Lorraine Johnson in her presentation at the American Association for the Advancement of Science in January. It’s a travesty! There are 6X more Lyme cases than HIV/AIDS cases per year. 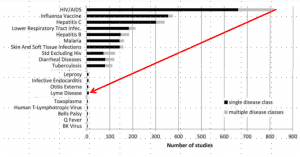 However we’ve been experiencing budget challenges at a national level and I think then funding was left out of the bills in recent years to minimize the obstacles to passage. The bills are proving hard enough to pass even without any funding. The main thing is to get a committee in place and then expand on that.

We need to get started, appoint a committee, and then get to work! Write those numbers down and be ready to roll on Monday!

PS Here’s a hint from Iowa Lyme advocate Betty Gordon: “CALL AFTER HOURS, each office has an answering machine & you can leave your detailed message there.  Over the years, i rarely ran into MESSAGES FULL unless it was a HOT topic like this bill is. Just wanted to share my personal experiences on this IMPORTANT bill to us all.”