TOUCHED BY LYME: Letterman gives a tick to Seth Meyers on TV 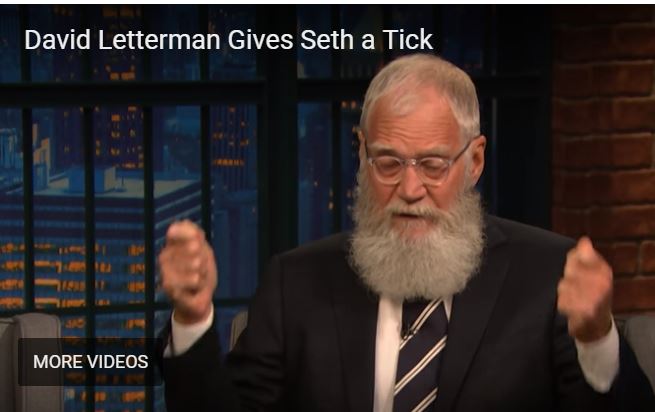 In an unusual observance of Lyme Disease Awareness Month, comedian David Letterman visited “Late Night  with Seth Meyers” with something unexpected in his pocket.

It was a baggie containing a live tick.

“Anybody here ever had Lyme disease?” Letterman asked the audience.  “I’m doing this to promote epidemiological health and awareness because Lyme disease, ticks, they’re everywhere.”

Meyers asked him if he’s had Lyme disease, to which Letterman replied, “Oh yeah. Probably got it now.” He added that he also has had ehrlichiosis, another tick-borne disease.

Letterman said he’d pulled the tick off himself two days earlier, and it had been in the plastic bag since then. (Still alive!)

Meyers asked Letterman if he planned to get the tick tested.

Letterman answered, “No I’m not going to have him tested, he’s yours.”

(Editor’s note: Professor Kerry Clark, of the University of North Florida, has sent us the following message: “The tick that Letterman had with him is an adult American Dog tick, Dermacentor variabilis. I couldn’t tell if it was an adult male or female. It is NOT Ixodes scapularis.”)

Watch the conversation here. It starts at 3:30.


My recommendation to Dave and Seth? Send it to TickReport.com. According to the website, it will test for several pathogens and email you the results in three business days.