TOUCHED BY LYME: How to heal yourself when no one else can 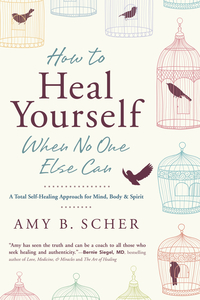 In 2005, a 25-year-old California woman named Amy Scher began experiencing bizarre symptoms, including pain (“everything from my feet to the top of my head was screaming in agony”) severe muscle weakness (“I couldn’t lift my arms above my head”) and other bodily dysfunctions.

As she got sicker and sicker, Scher consulted many doctors over a two-year period before finally getting accurately diagnosed with Lyme disease. By that time, her body was severely damaged. When months of Lyme treatment did little to ease her symptoms, she decided to take a different path.

Scher set off for India to receive an experimental course of stem cell therapy which appeared to help. She described that experience in her first book, “This is How I Save My Life: A True Story of Embryonic Stem Cells, Indian Adventures, and Ultimate Self-healing.” (Editor’s note: That first volume is now out of print. There’s now a completely revised edition with the same title.)

But that’s not the end of her story.

Two years later, troubling symptoms resurfaced. “All at once, unruly forces inside of me were colliding, culminating in an all-too-familiar ‘here we go again’ storm.” In London at the time, she visited a practitioner of Traditional Chinese Medicine, whose herbs and acupuncture offered some relief. Yet they did not seem the complete answer.

Back home in California, after “getting lost in the chaos of medical decision-making,” she finally focused on what someone had once told her: you have the power to heal yourself. And she decided to try. That process, and her eventual work as an energy therapy practitioner, form the basis for her new book, “How to Heal Yourself When No One Else Can.”

The term “energy medicine” means different things to different people. Scher defines it as “the process of balancing and enhancing the energies of your body.” She asserts that it’s a powerful tool for getting well again. “I did what doctors couldn’t do for me, what stem cells couldn’t do for me, and what many said would never happen: I healed.”

In her book, she proposes a three-point approach to healing:

Part One: Surrender, Accept and Flow “Before you can even begin to heal, you have to surrender to where you are as your starting point….Being right where you are and being at peace with that is a required part of the healing process.”

Part Two: Identify Blockages “The body’s symptoms are full of clues, messages, and metaphors that can help us identify exactly what needs to be healed inside.”

The book expands on different aspects of the three points, with such chapters as “Get Answers from the Subconscious Mind,” “Learn the Language of Your Body,” and “Release Harmful Beliefs.” Scher discusses muscle testing, a method of “tapping” called Emotional Freedom Technique, and “The Real F word—Fear.”

She explains the unhealthy life patterns that many people unwittingly fall into, such negative self-talk, negative thought loops, and what she calls a “draining vocabulary.”

“There is one simple question you can ask yourself to help determine which choice you are making: Will this action, language or behavior deplete my healing energy or fuel it? That’s it. New rule: If it will deplete it, delete it.”

Scher offers a variety of techniques for recognizing energy blocks and methods for clearing them. Ultimately, she says, it’s about getting rid of the stuff that isn’t part of the real you–and emphasizing qualities that are.

Above all, she encourages the reader to be open to change. “Healing takes courage and grace and a sharp turn in the direction away from so much of what you know.”

Tags : Amy Scher, energy medicine, How to heal yourself when no one else can