TOUCHED BY LYME: Being your own superhero 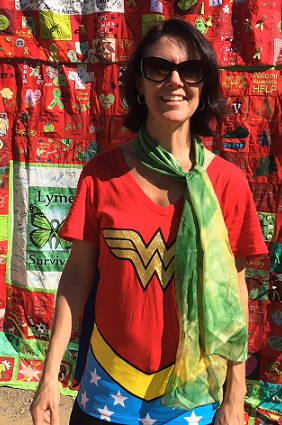 Last month, at the IDSA Lyme protest in San Diego, I met Michelle Trostler, who was dressed like Wonder Woman. When I asked why, she said, “Well, we all have to be superheroes just to get through the day, don’t we?”

She told me she actually identifies closely with the Matt Damon character in the movie The Martian, which she’d recently seen.  She has expanded those thoughts into the following guest blog:

I recently enjoyed the movie The Martian, which begins when Mark Watney (Matt Damon) is left on Mars, alone, presumably dead. He is the only living creature on a planet where nothing grows, no one is looking for him and he has to survive until the next manned Mars mission in four years’ time. His isolation is unimaginable. He takes stock of what supplies he has and begins McGyvering an existence alone, on a planet completely unto himself.

Isolated in a way few can begin to fathom, he takes to video-logging himself. He constructs his own path forward in an attempt to survive his demanding and unthinkable situation. While video-logging, he explains that his needs are exponentially more complicated than the basic tools at his disposal. His survival will require a Herculean effort, this he knows for sure. But exactly how he will survive, his path forward, is unknown. There is no roadmap for his journey. Being deeply honest, he says to the video camera,

“I am going to have to science the sh*t out of this.”

Immediately I thought, “That’s what I’m doing every day!!”

Isn’t that what all of us Lyme warriors do? We are alone in a situation few around us can understand, searching incessantly for some morsel, some minuscule crumb of information that will help us tip the balance toward health from a place of illness.

Watching The Martian, I felt like I was watching myself. I McGyver my existence every day!  As Mark Watney persevered, he faced potentially deadly setbacks — I thought of my trip to the ER earlier this year.  He kept going in the face of undeniable uncertainty as to whether he would live or die. I’ve definitely thought I would die during my Lyme journey, haven’t you?

Without another soul to rely on or a roadmap to guide him, the Martian, Mark Watney, sets his sights on survival. He is his own superhero! Step by step, he searches his mind, using his knowledge and creativity to make progress towards his goal, despite his desperate situation and blunt equipment that was transported there for a very, very different type of mission. Facing what may be insurmountable, he rises to the level of superhero to save himself.

Lyme warriors do this every day.  Our efforts toward health in the face of pain, financial hardship, crumbling relationships, and a paralyzed medical system make us superheroes! How could any mere human survive these situations?

For example, the vast majority of us live in extreme isolation. For my part, I barely eat with people outside of my family. I cannot go to Starbucks for a coffee to be social. I never know if I’ll feel well enough to enjoy plans with friends so I rarely make them. Just getting through the day takes superhuman powers.

I know that every Lyme warrior who reads this will agree that the power from within to fight is called upon constantly and that we really did not know we had such power before Lyme interrupted our lives. We truly are superheroes.

So imagine yourself as your favorite superhero as you tackle your day. Grab a dishtowel, a sarong, or a sheet and wear it as a cape to remind yourself of your status as a superhero. You’re already doing this for yourself anyway, so why not name it and celebrate it? Own it. Own who you already are because that’s who Lyme made you.

When you feel isolated and you feel like the deck is stacked against you and you can’t see how you’re going to move forward, be your own superhero. Hardship brings power. That power is your superhuman side!

Michelle Trostler lives in Southern California, where she only occasionally wears her Wonder Woman costume. She can be reached at Michelle (at) trostler (dot) net.