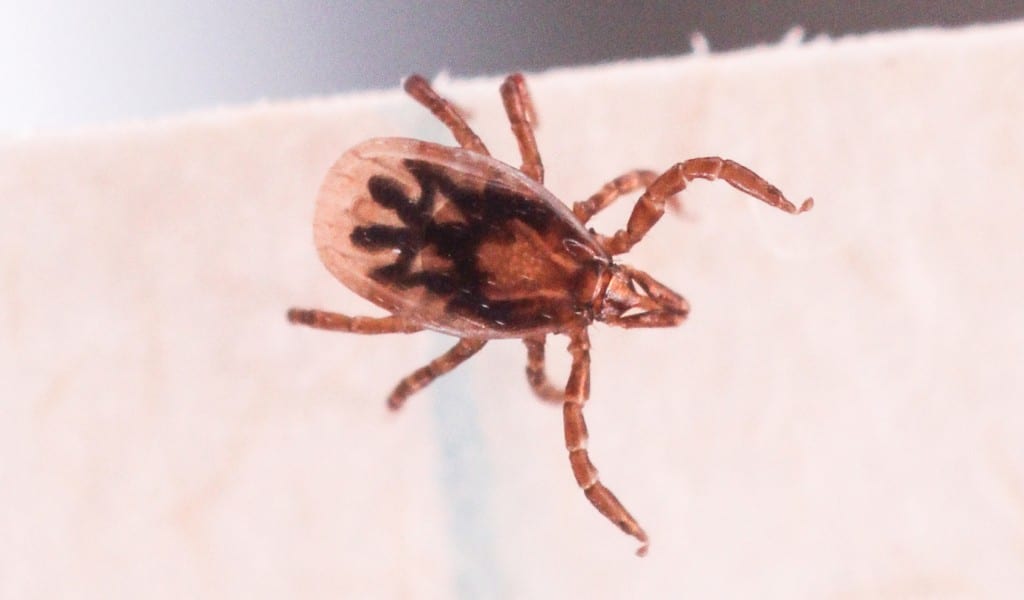 WEST LAFAYETTE, Ind. – An international team of scientists led by Purdue University has sequenced the genome of the tick that transmits Lyme disease, the most common vector-borne illness in North America.

The decadelong project, involving 93 authors from 46 institutions, decodes the biology of an arachnid with sophisticated spit, barbed mouthparts and millions of years of successful parasitism. The genome of Ixodes scapularis, known as the deer tick or blacklegged tick, also sheds light on how ticks acquire and transmit pathogens and offers tick-specific targets for control.

“The genome provides a foundation for a whole new era in tick research,” said Catherine Hill, lead author of the paper, Purdue professor of medical entomology and Showalter Faculty Scholar. “Now that we’ve cracked the tick’s code, we can begin to design strategies to control ticks, to understand how they transmit disease and to interfere with that process.”

I. scapularis is the first tick species to have its genome sequenced.

The principle genome paper was published in Nature Communications on Tuesday (Feb. 9) and is available at http://dx.doi.org/10.1038/ncomms10507.

Tick-borne illnesses cause thousands of human and animal deaths annually, and ticks transmit a wider variety of pathogens and parasites than any other arthropod. They primarily spread disease by creating a feeding wound in the skin of their hosts, regurgitating infected saliva into the wound as they ingest blood.

Despite ticks’ capacity to acquire and pass on an array of pathogens, research on ticks has lagged behind that of other arthropod vectors, such as mosquitoes, largely because of a lack of genetic and molecular tools and resources.

“Ticks are underappreciated as vectors – until you get Lyme disease,” Hill said.

About 30,000 cases of Lyme disease cases are reported in the U.S. annually, most concentrated in the Northeast and upper Midwest. But the Centers for Disease Control estimates the actual number of cases is 329,000 a year, many of which are unreported or misdiagnosed.

While not fatal, Lyme disease can be permanently debilitating if the infection is not treated before it reaches the chronic phase.

The deer tick also vectors human granulocytic anaplasmosis, babesiosis and the potentially lethal Powassan virus. Other tick species transmit a number of flaviviruses, including some that cause hemorrhaging and inflammation of the brain and the membrane that covers the brain and spinal cord. Less is known about the tick-borne flaviviruses than Lyme disease, Hill said, but they are particularly important diseases in Europe and parts of Asia and represent global threats to human health.

“Genomic resources for the tick were desperately needed,” she said. “These enable us to look at tick biology in a systems way.”

Identifying the proteins involved in the transmission of tick-borne diseases could help researchers develop strategies to halt this process.

Researchers pinpointed some of the proteins that play key roles in the interactions between deer ticks and the bacterium that causes Lyme disease and proteins associated with the transmission of human granulocytic anaplasmosis, an emerging disease.

A companion paper published in PLoS Neglected Tropical Diseases identified proteins and biochemical pathways associated with infection and replication of the encephalitis-causing Langat virus, another pathogen transmitted by Ixodes ticks. These proteins could be candidates for drugs and vaccines and give clues to how the virus affects the tick.

“This study opens the door to understanding how tick-borne viruses exploit their hosts and offers unique insights from ticks that could be applicable to humans,” said Richard Kuhn, Purdue professor and head of the Department of Biological Sciences, lead author of the virus study and director of the Purdue Institute for Inflammation, Immunology and Infectious Diseases. “Once you know which host proteins are critical for virus replication, you can manipulate those proteins to interfere with the growth and development of the virus.”

An Inside Look at Tick Biology

Tick saliva, for example, teems with antimicrobials, pain inhibitors, cement, anticoagulants and immune suppressors, all designed to help the tick feed on its host undetected for days or weeks.

The genome reveals that tick saliva contains thousands of compounds – compared with mere hundreds in mosquito saliva – a diversity that presumably allows ticks to exploit a wide range of hosts and stay attached for a long time, Hill said.

The researchers also identified genes that could be linked to ticks’ ability to synthesize new armorlike cuticle as they feed, allowing them to expand over 100 times.

The team searched for clues to how ticks digest blood, a toxic food source due to its high concentrations of iron. The genome points to a number of proteins that link with iron-containing heme molecules, the byproducts of blood digestion, to make them less toxic.

One of the major findings of the genome project is that about 20 percent of the genes appear to be unique to ticks. These genes could provide researchers with tick-specific targets for control.

“We don’t see the equivalent of these genes in a mosquito or human,” Hill said. “That’s a fascinating collection of molecules, and as a scientist, I can’t wait to get into that pot of gold and find out what these are and what they do.”

Unique Features of the Genome

One of the main challenges the research team faced was the complexity of the tick genome, one of the larger arthropod genomes sequenced to date. Another obstacle was the unusual amount of repetitive DNA, which comprises about 70 percent of the genome, an aspect further explored in a companion paper published in BMC Genomics.

While copies of duplicated genes are often eliminated, the tick genome has retained these repeated genes. Many of them have mutated, suggesting that the two copies of a gene are associated with different functions and give the tick an evolutionary advantage. These duplicated genes could also be targets for new tick control measures.

“We estimate those gene duplications took place probably just after the last Ice Age when tick populations would have been expanding into new habitats,” Hill said.

The project also included the first genome-wide analysis of tick population structure in North America, resolving a long-standing debate over whether deer ticks in the North and South are actually two different species. According to Hill, the genome offers convincing evidence that the two populations are the same species, despite their genetic differences. Because the majority of Lyme disease cases occur in the North, there might be a genetic component to ticks’ ability to transmit Lyme disease that a comparison of the two populations could illuminate.

“Now we’ve got the script to help us work out what proteins the tick’s genes are making, what these proteins do and whether we can exploit them to control the tick,” Hill said.