TOUCHED BY LYME: “When the story of Lyme disease is written, it will be the story of patients standing up and being heard." 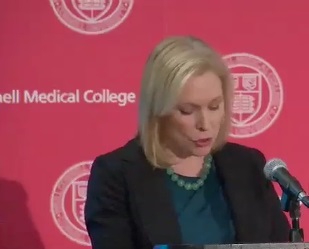 Highlights from the Tick-Borne Disease forum streamed live from NYC this morning.

New York Senator Kirstin Gillibrand, Connecticut Senator Richard Blumenthal and NY Congressman Chris Gibson were among the luminaries in Weill Cornell Medical College this morning for a forum on “The Silent Epidemic of Lyme and Tick-borne Diseases.”

The session was streamed live.

Moderated by David Roth of the Tick-borne Disease Alliance, the panel also included:

Senators Gillibrand and Blumenthal started the ball rolling with excellent summaries of how much Lyme patients are suffering and how the government response to this disease is woefully inadequate.  Two of my favorite quotes:

(Gillibrand): “We need a better strategy than just checking our kids after a day at the park.”

(Blumenthal): “When the story of Lyme disease is written, it will be the story of patients standing up and being heard.”

A major glitch in the proceedings, to my mind, was the fact that Dr. Roy Gulick was introduced as giving “some background about Lyme disease.” In fact, Dr. Gulick presented the IDSA/CDC view of Lyme disease, delivered as if it was irrefutable fact. He was allowed to frame the issue. His remarks were NOT immediately followed by somebody saying, “That’s the IDSA point of view. Now, let’s hear from this other person, to give us the ILADS point of view.”

Another favorite part of the event for me were comments by nationally syndicated cartoonist John McPherson, who discussed his own struggle with Lyme disease. Take a look at the cartoon he created to depict how restrictive the IDSA Lyme guidelines are: