Companion bill to bipartisan TICK Act introduced in the House 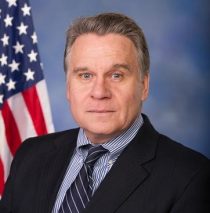 It was also inspired by legislation Smith and Peterson introduced earlier this year (HR 220) to create a new national strategy on Lyme with enhanced provisions to provide funding for critical research, prevention and protection programs, and coordinating federal efforts across agencies to fight Lyme disease. The Senate version was introduced by Sens. Susan Collins (ME), Tina Smith (MN), and Angus King (ME).

“Lyme disease prevalence has exploded and there are cases in every state across the nation. We need a strong, coordinated effort at all levels to combat this disease which is crippling Americans of all ages,” Smith said.

“The recent report to Congress of the HHS Tick-Borne Disease working group should sober us all—there are around 300,000 estimated new cases of Lyme in the U.S. each year, with 18 recognized tick-borne pathogens and new ones emerging.”

“Having identical bills in the House and Senate with bipartisan support in each chamber, reflects an added urgency to combat Lyme and offers the best opportunity to finally meet this disease with the federal resources and funding it demands,” Smith said.

“In addition to increasing the resources used to fight this epidemic, we need to make sure our federal response is targeted, well-coordinated and effective,” Smith said. “A new national strategy—as defined in the TICK Act—will ensure everyone is on the same page in fighting Lyme.”

Smith’s legislation would also strengthen efforts at the regional and local levels to fight Lyme by reauthorizing Regional Centers of Excellence in Vector Borne Disease at $60 million over six years (FY2021-26). It would also authorize CDC grants of $120 million over six years (FY2021-26) to build a public health infrastructure for Lyme and other tick-borne diseases.

Smith is the founder and co-chair of the Congressional Lyme Disease Caucus. He has authored more than a dozen comprehensive bills to advance treatment and prevention of Lyme, improve research, and improve federal efforts to fight Lyme.

Last week, he hosted a Congressional town meeting on Lyme disease in Wall Township, NJ. It featured a panel of national experts, including Dr. Ben Beard, Deputy Director of the Division on Vector-Borne Diseases at the U.S. Centers for Disease Control; Pat Smith, President of the Lyme Disease Association; and Dr. Richard Horowitz, an Internist and expert in treating patients with Lyme and other tick-borne diseases.