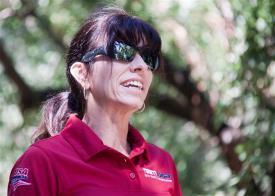 Last year, I blogged about Pamela O’Kane, who almost died from Lyme disease in 2006. After being practically unable to move at all, and being pummeled by a staggering array of debilitating symptoms, she gritted her teeth and made it through an extended period of harrowing Lyme treatment. She not only recovered enough to get back to work and athletics, but she went on to be a world class triathlete.

O’Kane, who teaches at Sacramento State University, was a guest speaker at last year’s Sacramento Lymewalk. She wowed the crowd with her inspiring story, and encouraged people not to give up in their personal fight against Lyme disease.

I contacted her recently to see if she’d join us again at this year’s Sacramento Lymewalk, scheduled for Sept. 24. Turns out there have been some challenging Lyme-related developments for her in the past year. But once again, she’s hasn’t given up the fight. This is from an email she sent me:

Before the Lyme Walk in 2010, I traveled to Budapest, Hungary in September 2010 as part of Team USA to participate in the 2010 ITU World Triathlon Championship.  As I shared at the Lyme Walk, the experience of participating in a World Championship for any sport can be awe-inspiring and at the same time overwhelming.

In September 2010, the rainy season in Budapest had already begun and it poured for days before our race.  We did a few practice swims in the Danube River, where the race was held.  Race day came and it was still pouring—we had to dump the water out our bike shoes during the race so we could put them on!  It was a great event, but with the rain and slick roads, participants were being cautious.  I had an exciting race, but afterwards the participants had to wait in the pouring rain to catch a ferry back to the starting point (and our dry clothes).  Now, we were wearing our lightweight racing clothes, we were wet and freezing and that ferry could not move fast enough so we could change.

As it turns out, the rain was not the worse part.  Due to the heavy rain for days, unbeknownst to us, area septic tanks were spilling into the Danube.  The day after the race I was overcome with illness, which is something my sister Denise battled the night before the race.  She actually lost 10 pounds in 12 hours before the race.  We picked up a parasite practice swimming in the Danube before the race, and it played havoc on our systems.

When we got home, we were treated with antibiotics, but about a month after the Lyme Walk in 2010, the parasite was too much for my immune system, and my Lyme flared up again after being dormant the last few years.  I was finally treated specifically for the parasite and Lyme, and after several months, I am finally back to my healthy state again—just in time to race USA Triathlon Nationals in Vermont last month.  But this time, it was before the rains came!

I am looking forward to the 2011 Sacramento Lyme Walk.  I hope to hear wonderful stories from other participants and their families.

This year’s Sacramento Lymewalk and Picnic will be held at 11 am on Sept. 24, at McKinley Park, 601 Alhambra Blvd., in Sacramento. All are welcome. No need to register. Wear lime green if you have it, and bring your own picnic lunch.

Click here for more information about the 2011 CALDA Lymewalks.