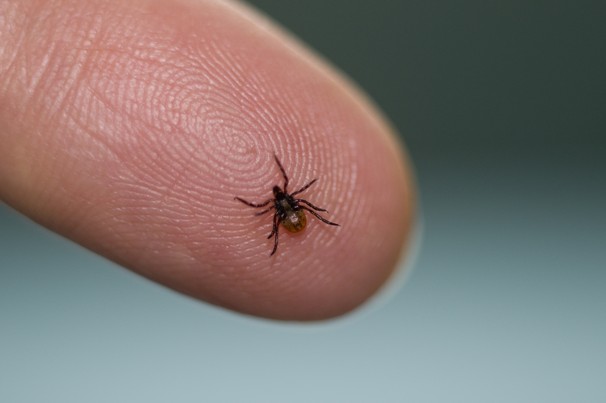 The county has created a Lyme Disease Commission to implement a 10-point action plan.

Loudoun County is fighting back against the rising threat of Lyme disease.

On Tuesday, the county Board of Supervisors voted unanimously to declare 2012 “Lyme Disease Awareness Year” in Loudoun. The supervisors also created a nine-member Lyme Disease Commission, which will implement a 10-point action plan to combat the disease in the county.

Leesburg resident Christina Guida was one of more than a dozen residents who spoke to the supervisors about the impact of Lyme disease during a public input session before the vote. Guida, who said she has suffered from chronic Lyme disease for years, told the board that the illness had affected her life “physically, emotionally, financially.”

Here is the 10-point plan as outlined in the Board of Supervisors memo:

1) Create a Lyme Disease Commission, appointed by the Board of Supervisors and made up of Loudoun citizens and health care professionals with an acute interest and expertise in Lyme disease prevention and education. This group will be charged with implementing the 10 Point Plan with the assistance of county staff as well as enlisting the help of citizens and organizations whose focus is already on Lyme disease.

2) Create a Lyme survey, as a follow up to the 2006 Lyme Disease in Loudoun County survey, to determine the current key risk factors for contracting Lyme disease as well as any other relevant statistics that will enable a better determination of where work and funding should be directed.

3) Add a high-profile link to the front page of the Loudoun County website that will direct viewers to the County’s web page which contains comprehensive information on Lyme disease prevention and treatment.

4) Develop a set of educational materials targeting different age groups, including elementary schools. Work with Loudoun County Public Schools to provide students with educational materials that can be disbursed through their health classes as well as consider sending out information on Lyme in children’s backpacks, as has previously been done. Suggest having a contest for school-aged children to create a tag-line (for example, “It’s Time to Know about Lyme”) and a logo for this effort.

5) Organize a series of Lyme Education Forums within the County that include a panel of experts that can field questions from the public regarding Lyme, provide educational materials to the public as well as help facilitate the formation of Lyme Support groups in underserved geographic areas of the county.

6) Work with the local newspapers to place a series of monthly articles concerning Lyme once a month for the first year, with quarterly articles thereafter. These articles would keep the public up-to-date with advances in prevention and treatment, inform citizens of new resources that are available to them, as well as publish a spraying schedule for public parks.

7) Establish a list of doctors that specialize in the diagnosis and treatment of Lyme disease and provide this information on the County’s Lyme webpage in addition to any new educational materials.

8)Develop information for homeowners on the costs and benefits of spraying their yards for ticks.

10) Study the cost and feasibility of implementing two types of insecticide applications that will immediately begin to mitigate the spread of Lyme disease in Loudoun: spraying county-owned properties and licensing and placement of 4-poster deer feeders on private and/or public property. The Center for Disease Control (CDC) states that broadcast spraying of areas of concern once a year, reduces the tick population by 65%.
a. Spraying County-Owned Property: In addition to studying the cost and feasibility of spraying county-owned properties, immediately begin a pilot program that targets six western parks that have been identified and selected based upon their small to moderate sizes, geographic locations, and logistical ease of spraying. The suggested parks are:
Franklin Park
Lucketts Community Park
Mickie Gordon Memorial Park
Nell Boone Park
Philip Bolen Memorial Park
Woodgrove Park
b. Four Poster Deer Feeders: Work with the VA Department of Game and Inland Fisheries (DGIF) to study the feasibility of developing a county pilot program for the issuance of permits for the application of acaricides to deer via four-poster devices for the purpose of controlling the tick population and reducing the spread of tick-borne Lyme disease. This program has already been initiated by the Executive Director of DGIF as a follow-up from legislation introduced during the General Assembly session. The program should explore the cost, feasibility, and safety of placing four-post feeders on rural county owned property in addition to assisting private citizens in obtaining and legally gaining permits to safely locate them on their own property. The ‘4-Poster’ device is specifically designed to kill species of ticks that feed on white-tailed deer and especially those for which white-tailed deer are keystone hosts for adult ticks. As deer feed on the bait, the design of the device forces them to rub against pesticide-impregnated applicator rollers. The rollers, in turn, apply acaricides to their ears, heads, necks, and shoulders where roughly 90% of feeding adult ticks are attached. Through grooming, the deer also transfer the acaricides to other parts of the body. Studies have shown that use of four-poster technology has resulted in the control of 92 of the 98% of free-living tick populations in areas around the devices after three years of use.