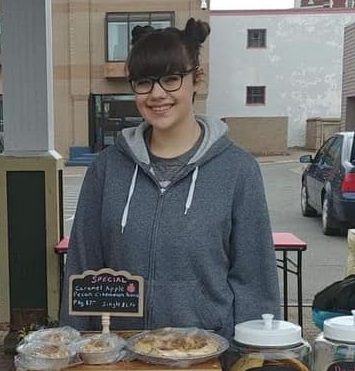 As I scrolled through Facebook the other day, a post from the Messy Buns Bakery in Nova Scotia caught my eye. There turns out to be a poignant tie to Lyme disease.

Here’s what it said:

Ever wonder the story behind Messy Buns Bakery?

In June of 2018, our 17-year-old daughter, Hailey, started her own business and named it Messy Buns Bakery. (The name is a play on words because she often wore her hair in two messy buns, and also sold an assortment of messy buns.)

Hailey sold her homemade breads, messy buns, cookies and more at two local farmers markets. Her business was just getting off the ground and picking up speed when Hailey’s heart gave out and she was rushed to hospital in critical condition.

Hailey spent the next FOUR months or 116 days in the intensive care unit. She suffered greatly during this time. On October 27,2018, Hailey passed away unexpectedly. She was buried a week later on her 18th birthday.

But why, do you ask, did Hailey’s heart give out? There is only one answer. Lyme disease.

Lyme infection in her heart

But this answer did not come easily. In fact, Hailey had been sick for years. Ten years to be exact. She was told she had chronic fatigue, fibromyalgia, anxiety, depression and the list goes on. After much research, three negative Canadian tests and finally one positive American test, we discovered Hailey had Lyme disease.

But this test was not accepted in our Canadian medical system and so instead of receiving treatment for Lyme, Hailey was told to seek mental help and that her symptoms were in her head. It has now been proven in a Canadian lab that Hailey had a severe Lyme infection in her heart.

We chose to start up Hailey’s Messy Buns bakery once again and donate a percentage of all proceeds to Lyme research done right here in the Atlantic provinces. When we bake, we think of all those who are suffering with Lyme disease, and we think of the difficulties it is to be heard and treated. We stand for change and awareness. We have met so many new faces in the Lyme community and we take every opportunity to take the time to answer questions anyone might have.

This is the story of Messy Buns Bakery. We bake with love for all those suffering this horrible disease and in memory of our daughter. We stand with you, and we fight for you.

Thank you all for supporting our business, by doing so you are helping bring change. We appreciate it from the bottom of our hearts, and we will continue to do all we can to change the narrative and treatment around Lyme disease, fueled by the suffering and loss of our daughter. Change needs to happen.