LYME SCI: Filling my mind with Lyme knowledge at ILADS 2016 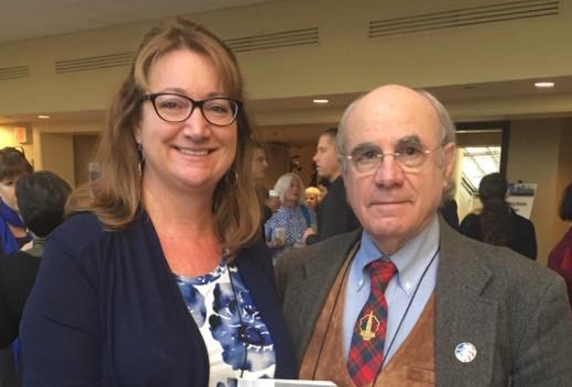 In November, I had the pleasure of attending the International Lyme and Associated Diseases Society (ILADS) conference, in Philadelphia. Its purpose is to give physicians and scientific researchers from around the world a platform to discuss medical literature, current research, and evidence-based treatments. The theme of this year’s conference was “Lyme Disease: An Evolving Paradigm for Chronic Illness.” It was a collaborative effort between ILADS and Drexel University.

I came to the conference with an open mind. As a mother of a child with a chronic illness complicated by Lyme and multiple co-infections, I am very aware of the controversies that surround tick-borne diseases. One of the first things that struck me at ILADS was the friendly, approachable nature of the presenters. I felt this really helped to foster an open dialogue which is sorely needed between science and medicine, especially with all things “Lyme.”

The conference was spread out over four days. The first day covered the fundamentals of tick-bites and complications that arise from late, untreated, and persistent Lyme borreliosis.Then it pulled it all together with suggestions for treatment of patients with complex presentations and/or multiple tick-borne infections.

Each morning we attended a “plenary session” with all attendees in one large conference room. The afternoons were divided into five “breakout sessions” that focused on either integrative medicine, stealth pathogens, pediatrics and neuropsychiatrics, laboratory and scientific advances, or evolving concepts and research. Topics ranged from Alzheimers to zika, literally everything from A to Z. There was a special session where difficult cases were presented and discussed, and a separate session for legislation and legal issues.

I cannot go into detail of the more than 70 lectures, but I will say this — I was extremely impressed with the depth of knowledge and the scientific approach to every concept that was presented. In one particularly ‘scientific’ session I attended, even the lecturers were taking notes, as the other scientists presented their research. To say, “I was in over my head,” would be an understatement. In my opinion, many of these sessions could have easily been the outline of an entire semester in college.

Reflecting on the Past

Years ago, I lost one of my best friends to AIDS. It was at a time when mainstream medicine was in full denial of the AIDS epidemic and resistant to change. However, there were a few pioneers who were willing to go out on a limb, stick with their instincts, and keep searching until they found treatment which would put their patients into remission.

It is astounding to me that Borrelia burgdorferi, the cause of Lyme disease, was identified only one year after the discovery of HIV, the cause of AIDS. Today, more than 30 years later, HIV test kits are on their fifth generation and nearly 99% accurate, yet the standard test for Lyme Disease remains no better than a coin toss. [2] Where HIV patients receive all the benefits of modern, precision medicine, Lyme patients are still prescribed medications that were developed in the 1940s.

The Controversy (or lack of)

There’s less controversy surrounding early diagnosis and early treatment of Lyme disease (though many people still have trouble getting diagnosed in a timely way.) However, late diagnosis (chronic Lyme) or so-called Post-treatment Lyme Disease Syndrome (PTLDS) is where the controversy really heats up. But if you’re a patient and you aren’t better, you don’t care about the controversy. Patients just want to get well. It shouldn’t be a controversy. If patients are sick we need to continue to look for cures. It’s that simple!

With over 300,000 Americans infected annually, Lyme disease is now the most common vector-borne disease in North America. Even with early treatment, up to 36% of patients will have lingering chronic symptoms. Unfortunately, 74% of patients with chronic Lyme disease report “fair” or “poor” health, as compared to only 16% of the general population who report fair or poor health.[3] This is not controversy, this is considered treatment failure. Period.

The single biggest thing I learned from ILADS is that just like AIDS, chronic Lyme disease is a multi-factoral, multi-systemic, immune-modulating illness. Lyme disease is a slow growing stealth pathogen that is capable of evading the immune system long enough to spread throughout the body.

Healing from chronic tick-borne infections is rarely a linear progression, and just like AIDS, it requires a trained specialist, one who understands how to diagnose and treat primary, as well as other opportunistic infections as they arise. More than anything, it requires a caring practitioner who is willing to listen and stick with the case through good times and bad. Someone who is compassionate, yet fearless when it comes to staying ahead of the learning curve. Most importantly, it requires a warrior. And believe me, I met a lot of warriors at ILADS.