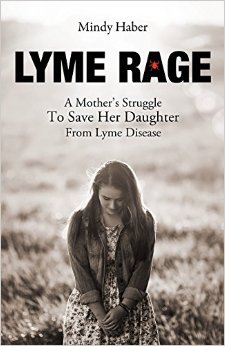 (Book review) Lyme Rage: A Mother’s Struggle to Save Her Daughter from Lyme Disease, by Mindy Haber.

Mindy Haber’s daughter Sophie was nine years old when she started experiencing troubling symptoms. Intense headaches. Gut-wrenching, dry-heaving coughs. Blurry vision. A heightened sensitivity to noise, where any sound above a whisper would cause stabbing pain to her eardrums. Trips to the doctor yielded questions but no answers.

Then, one day, Sophie collapsed and couldn’t walk. This led to a hospital stay and more questions without answers. The possibility of Lyme disease was raised and then ignored (although Sophie had had two separate tick bites during the previous 12 months.)  A psychologist was brought in to evaluate the girl.

“What I didn’t realize and couldn’t possibly have imagined,” Haber writes, “was that there was a witch’s brew in progress.”  The psychologist dropped a bombshell on the parents. There was nothing physically wrong with Sophie, she said. The girl “missed” her mother, who was working full-time. According to the psychologist, Sophie had created the whole scenario as a way to get more maternal attention.

Could it be possible that a child could scream in pain for almost eight hours in an emergency room only to make it clear to her mother that she wanted attention? …Could it be feasible that a happy, outgoing child who had always been smiling could change overnight to an attention-seeking, manipulative, deviant child who was bordering on sociopathic tendencies as if she was taken over by the devil as in The Exorcist?

Eventually, Haber took Sophie to an ILADS doctor, who diagnosed the girl with Lyme disease and started her on antibiotic therapy. But that was by no means the end of the story. While antibiotics seemed at first to ease some of her symptoms, soon other ones made their dreadful appearance. Sometimes the girl erupted into screaming rages…other times she had horrifying nightmares …sometimes she had seizures.

Once, the mother reports, Sophie “started grunting and growling, emitting sounds without intention or purpose. …She began to run around in circles, flailing her arms as these deep, guttural, feral sounds burst forth from her mouth….She was out of control like nothing I had ever seen before.”

The mother continued her search for answers. Ultimately, a combination of antibiotic therapy, herbal protocols, nutritional support for the immune system, and neurofeedback—a computer-assisted way of retraining the brain—put Sophie on the road to recovery.

Over time, the girl’s condition improved. By age 13, Sophie was out of the wheelchair and largely free of pain and anxiety. “She was still working on building her strength and stamina but she was no longer collapsing into a bedridden fatigue,” her mother writes.

Mindy Haber and her family live in New York’s Hudson Valley, which has one of the highest rates of Lyme disease and other tick-borne infections in the entire United States. Why were her doctors so clueless about how Lyme disease can affect the body and the brain? Why were they so quick to dismiss the significance of two known tick bites? Why was this family left on its own to find solutions for Sophie? Unfortunately, such scenarios are all-too-common in the Lyme community.

Lessons in this book include: Take your child seriously when she complains about weird symptoms. When doctors say there’s nothing to be done, keep looking for answers. Be willing to explore alternatives. And, hang in there, it may be a bumpy ride.

TOUCHED BY LYME is written by Dorothy Kupcha Leland, LymeDisease.org’s VP for Education and Outreach. Contact her at dleland@lymedisease.org. On Twitter, she’s @dorothyleland.