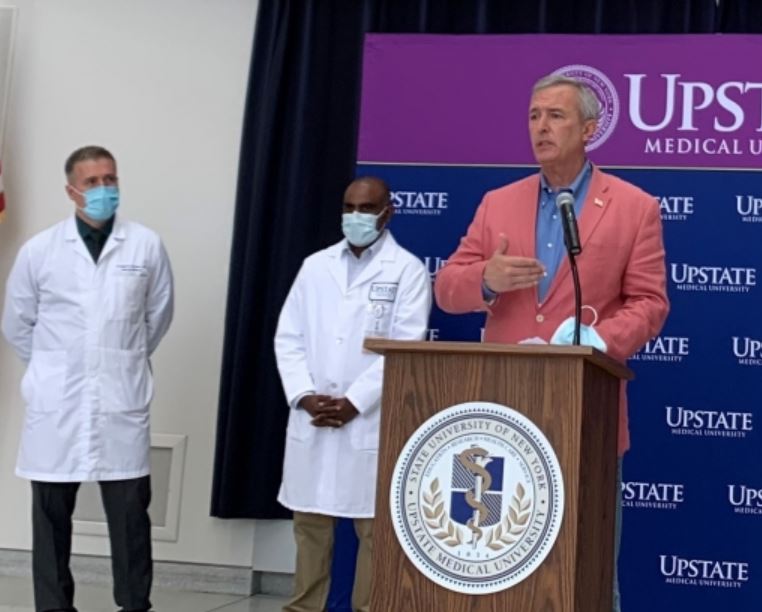 Standing with experts from SUNY Upstate Medical University and the SUNY College of Environmental Science and Forestry (ESF), New York Congressman John Katko this week announced renewed efforts on the federal level to combat Lyme disease and other tick-borne illnesses.

The announcement comes amid a recent surge in the tick population in local communities in Central New York and other places throughout the region, with a greater share of those ticks containing microbes that cause Lyme disease and other illnesses.

Katko has reintroduced the Tick Identification Pilot Program Act (HR 5466). The bipartisan bill would establish a pilot program under the Centers for Disease Control and Prevention (CDC), allowing states to apply for grants to establish tick identification programs.

Through these programs, individuals would be able to send pictures of a tick they encounter to a vector-borne disease biologist. That expert would identify the tick and respond with an estimate of the risk that the tick is carrying a disease, as well as a recommendation for appropriate follow-up action, such as seeking medical treatment.

Additionally, Katko announced a push for increased funding for the CDC to support research and data collection on tick-borne illnesses. Together, these efforts aim to educate the general public on tick-bite prevention methods, collect data on ticks as the population grows, and improve public health outcomes.

“In Congress, I’m proud to continue my efforts to deploy innovative technologies against tick-borne illnesses and increase federal resources for the treatment and prevention of these diseases.”