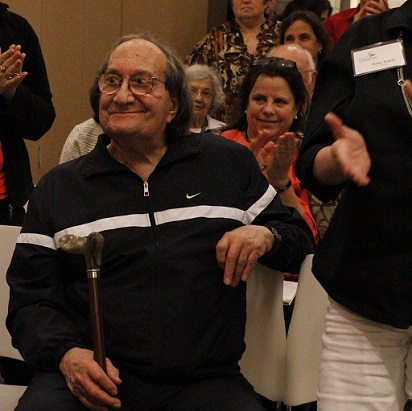 The following guest blog is excerpted from a lengthy interview with Lyme pediatrician Dr. Charles Ray Jones on the Lyme Connection website. In this section, Dr. Jones discusses how 20 years of harassment by medical authorities almost got him to give up treating children for Lyme–and what prompted him to keep at it.

When I first spoke with Dr. Jones, I thanked him for giving me the opportunity to interview him and I told him that I wouldn’t be throwing any curve balls his way. Characteristic of Dr. Jones, he told me he loved curve balls. This is a man who has been unafraid to fight for what he believes, regardless of popular – and often institutionalized practices. From his days at Boston University’s Divinity School and his march with Martin Luther King Jr., to his steadfast treatment of children with Lyme disease, Charles Ray Jones has remained unwavering. He has treated children from all over our country and all over the world. He has given hope to parents who thought their child was lost. His detractors have said he treats recklessly, but the proof remains: desperately sick kids cured of tick-borne illness. Dr. Jones has been investigated by the medical community, prosecuted, fined, and monitored for the last four years. His legal fees, fines, and monitoring costs drained his bank account and nearly shuttered his practice. The Lyme community – patients and practitioners – responded, donating enough money to keep his practice going. He is once again caring for kids, despite the fact that he’s 85 years old and has had numerous surgeries. But, his story, the one he’d like told, is about the children who have come back from the brink, and the hope that even more can be successfully treated.

Janet: I know that you just finished the mandated monitoring. Did it slow you down a lot?

Dr. Jones: No, it didn’t slow me down but it was annoying. For four years, I was on probation and was monitored every month. The cost of the monitor was $4,000 a month, in addition to a $10,000 fine. It was a very steep penalty, the highest that any physician who maintained the ability to practice in the past, say 20 years has received.

Janet: Do you think it was about the issue of long-term Lyme?

Dr. Jones: No, that wasn’t even an issue. It was about me. It’s a vendetta. It’s been going on for 20 years. The hearings lasted two and a half years, and when they sentenced me, I had a chance to either resign my license or fulfill the responsibilities of the sanctions. I was ready to say: That’s it, they win, the kids lose.

But that’s when a little boy named Timmy came back to my office after not seeing me for three and a half months. Timmy was barely seven years old when his mother [first] brought him in. She thought his many disabilities might have resulted from the Lyme and other tick-borne disease that she had for 15 years prior to his conception. She had been untreated and undiagnosed until three months before he came in.

When Timmy came in he was busy, climbing on the chairs, jumping to the floor, and doing a couple of laps around the office. He had been diagnosed with Autism Spectrum Disorder (ASD) at nine months of age. He had severe hypotonia, gastroesophageal reflux (GERD) and sensory integration disorder. He had receptive speech but no expressive speech. He was definitely not autistic. He liked to be held, but didn’t stay very long. He also had very good eye contact. He was diagnosed with Lyme disease by testing as well as by clinical evaluation. He not only had Lyme (Borrelia burgdorferi), but Bartonella and Babesia as well.

On one of his laps around the office, Timmy came up to me and looked me directly in the eyes. I put my hands on his cheeks and held them there and said, Timmy, I hope I have the key that can unlock your brain. Then he was off running. It was if I had spoken to the air.

Timmy came back three and a half months later, after being on antibiotics. Instead of running to the door and into the room, he walked to the door and into my office. He came up to me, took my hands and put them on his cheeks and held them there. He looked me directly in the eyes and said, Thank you for giving me the key to unlock my brain. Well, Timmy was instrumental in my staying.

Janet: How many children do you see in a week?

Janet: How do you keep track of them?

Dr. Jones: The cases are complex so I go through the charts each night before the patients come in. Kids come in for a follow-up every three months, or every six months if they’re coming from abroad. Patients come here from every state in the U.S., from every province in Canada, every state in Mexico, all the countries in Central American, South America, and every continent abroad including China, North Korea, South Korea, Japan, Thailand, Burma, all of Australia, Borneo, Singapore, Saudi Arabia, Iraq, northern India, and every country in Europe.

The countries with socialized medicine don’t want to acknowledge Lyme because then they’ll have to treat it. However, two countries, Poland and Slovenia, have recently acknowledged that Lyme exists and realized if they don’t treat the children with Lyme disease, those children will not fulfill their genetic potential and will become economic burdens to the state. They’ve also concluded that if they don’t acknowledge Lyme disease in adults, those adults will not participate in the work force and therefore they too will become a burden to the state. This is a distinct problem in many countries, especially in Canada, where officials say Lyme doesn’t originate. Several parents of patients have been warned if they pursue the diagnosis of Lyme disease in their children, the government will take their children away from them, and the parents will be charged with Munchausen syndrome by proxy and arrested for endangering the well-being of a minor.

Janet: Do you have a sense that is changing?

Janet: Is the medical establishment still following what you do?

Dr. Jones: Yes, I’m always in their gun sight; that I accept.

Janet: I heard that you’re practicing medicine six to seven days a week. How do you stay healthy in mind and spirit?

Dr. Jones: I stay with it because I see the kids get better, that’s the main point.

Do you have some patients who don’t get better?

Very few. Some have refractory Lyme disease, you see this with older teenagers who are better on antibiotics, but the spirochete can never be eradicated. Once you define and delimit every single organism that’s involved, one can treat with antibiotics, but that might not reverse the process. If the antibiotics aren’t curative, then one can add IV immunoglobulin (IVIG), and this can result in a cure. IVIG is very successful but very costly. But first one has to delimit exactly what organisms are triggering the whole process of infection-induced autoimmune encephalopathy, where the infections cause the body to make antibodies to the brain and the nervous system. It’s not just Lyme, it’s Babesia, Bartonella, Candida albicans, Mycoplasma pneumoniae, it’s all the herpes-related viruses.

Janet Jemmott is editor of the Lyme Connection newsletter. Lyme Connection is a volunteer patient-run initiative founded by the Ridgefield (CT) Lyme Disease Task Force (RLDTF). They strive to make their community a healthier place by teaching people the best methods for avoiding Lyme and other tick-borne diseases and connecting patients and their families to helpful resources. Ongoing efforts include a website, newsletters, monthly support groups, the BLAST Tick-borne Disease Prevention Program, and an annual patient conference and health fair held at Western Connecticut State University each May.