NEWS: Scientist uses internet to find proper treatment for her own Lyme disease, then studies how other Lyme patients do the same 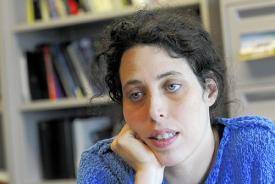 After her doctors couldn't help this scientist recover from Lyme disease, she turned to the internet to search for other solutions. Like others, she found it awash with conflicting information. After locating a doctor who would treat her with long-term antibiotics–and improving under that regimen–she researched and will soon present a study about how Lyme patients handle and are affected by competing medical information on-line.

When doctors proved unable to cure her Lyme disease, computer scientist Jennifer Mankoff did what many people do when they’re chronically ill: She went online to see what medical organizations had to say about it.

There the Carnegie Mellon University associate professor in the Human-Computer Interaction Institute found conflicting information and other users as befuddled by that as she was.

The majority of the sites said the tick-borne bacterial disease is easily treated and cured with antibiotics, especially if caught early. But, some of those sites said, if the disease does not respond to the drugs after a limited period of time — the Centers for Disease Control and Prevention recommend no more than two, two- to four-week courses of antibiotics — no cure is possible. “You manage the symptoms,” said Ms. Mankoff, 37, of Shadyside.

Other sites called long-term Lyme disease “chronic” and suggested it might be cured by much longer and varied therapy.

Her computer searches showed doctors on the extreme ends of the controversy.

Eventually, Ms. Mankoff found a doctor who agreed to do long-term treatment and after 18 months of antibiotics she felt well enough to stop the drugs. That was in October 2009.

During that time, she managed to get tenured, write a proposal for a research study, and start the paper with four colleagues. The topic: how longtime Lyme disease sufferers handled and were affected by the competing information online.

The study, on which she is lead author, has been accepted for presentation at the 2011 Computer Human Interaction Conference in Vancouver, Canada, next month.