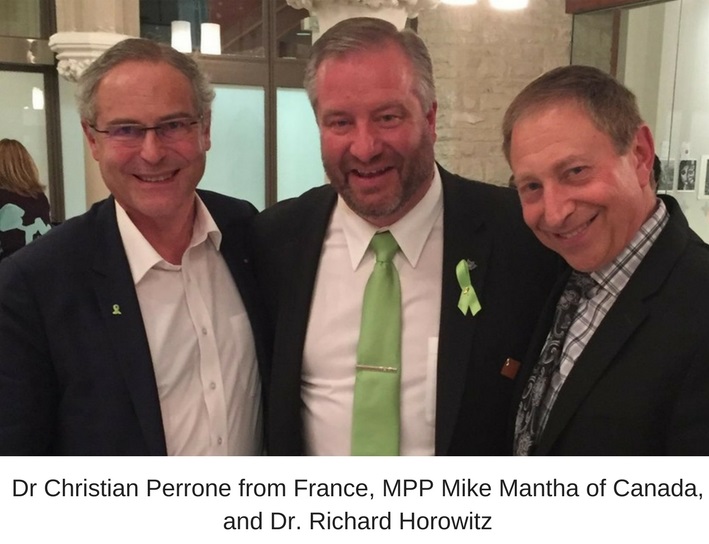 I was in Canada several weeks ago speaking at two Lyme conferences. When I got off the plane, the cab driver asked me why I was in Canada. I explained that Lyme and associated tick-borne diseases are spreading and have made their way into Canada via the migratory birds, making people sick.

I further explained to her that Canadian patients have been forced to leave their country to get help, as the Canadian government had adopted restrictive guidelines, making it more difficult for patients to get diagnosed and treated. They were subsequently coming in my office as well as other health care practitioners in the United States to get help.

In response to hearing this, she told me that I should write to the Prime Minister of Canada, the Honorable Justin Trudeau, and tell him about the problem in Canada. She then promptly told me that she would give me his email. At first I thought it was a classic joke of cab drivers in Canada for naïve tourists, and I said, “You have the Prime Minister’s email?”

She proceeded to tell me that “Yes, its public knowledge.”

I thought to myself, “That’s amazing if it’s true” and said to her: ”I don’t think the President of the United States has ever given out his private email, but I’ll take it!”

So, I wrote it down and in between lecturing the next day at the Lyme Out Loud conference in Toronto, I sent the following email to the Prime Minister of Canada:

Dear Prime Minister,
I arrived in Toronto last night to speak at two Lyme conferences. Lyme disease is spreading in Canada, and I am here to discuss with your local politicians (MPP Mike Mantha is here with me today), doctors and patients how to find a solution about this worldwide epidemic affecting Canadian citizens (who are forced to come to the US to see me for treatment).

CTV interviewed me this morning. I would love to share with you what I’ve learned to help the Canadian people. A cab driver who drove me to my hotel gave me your email and let me know that you will occasionally answer emails. I hope so.

I would be happy to send you my new book that was just released. I have it in English and French (I did my medical training in Belgium, I am fluent in French, and have been a consultant for the Belgian, French, Chinese, Australian, UK and US governments). I also have been nominated to serve on the Congressional Lyme committee in the United States. I would be happy to help the Canadian people and work with you to help lower health care costs and improve care for those who are chronically ill.

Thank you for your time and effort in reading my email.

I then let go of the thought of having ever sent the email, sure that I would never hear back from the Prime Minister. To my great amazement several days later, I received the following response:

On behalf of the Right Honourable Justin Trudeau, Prime Minister of Canada, I would like to acknowledge receipt of your correspondence regarding Lyme disease.

Please be assured that your comments have been carefully reviewed. I have taken the liberty of forwarding your email to the Honourable Jane Philpott, Minister of Health. While the Prime Minister appreciates being made aware of your expertise, he will leave the issue to be considered by Minister Philpott.

Thank you for writing to the Prime Minister.

I haven’t yet gotten a response from the Honourable Jane Philpott, Minister of Health, but I must admit, I’m impressed that someone took the time to read my email and respond!

Perhaps those of you living with Lyme in Canada want to pick up the ball and contact her and the Honourable Prime Minister Justin Trudeau. Let them know about your experience with Lyme disease in Canada.

One of the members of Parliament who is interested in hearing from you and helping, is MPP Mike Mantha. He spoke at the LOL conference and we had a great chat during the break and over dinner.

Here is a picture of Dr Christian Perrone, a renowned infectious disease physician in France (also known as an excellent human being and good friend), with myself and MPP Mike Mantha.

Christian just wrote a book on Lyme disease for the French speaking people, called “La Verite Sur La Maladie de Lyme” (“The Truth about Lyme disease”), which is available on Amazon France and in bookstores.

He is arranging for a coalition of ILADS doctors (Dr’s Bransfield, Shor, Stricker, Shea and myself) to meet as a working group next week at the Minister of Health’s office in Paris. We will all be there for the ILADS International Lyme conference (Paris Marriott Opera hotel, May 19th & 20th) and we are hoping to educate the Minister of Health’s office about Lyme, in order to help the French doctors and patients who are struggling with outdated guidelines.

I look forward to seeing all my European friends, patients and colleagues at the ILADS conference in Paris next week! The national and international awareness campaign goes on…