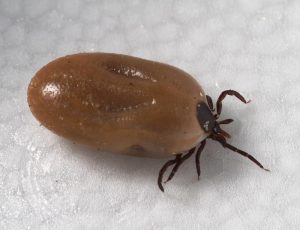 It started with fever and vomiting. Then the 5-month-old baby developed facial twitching, stiffening of his right arm and seizures. The family rushed him to Connecticut Children’s Medical Center.

Clinicians there performed tests, including a brain MRI that showed clear signs of a serious infection. The testing showed that the baby didn’t have meningitis, an infection in the tissues surrounding the brain. But he did have an unusual pattern of inflammation in the very deep parts of his brain.

Doctors didn’t know what was causing the inflammation. But the parents said that two weeks earlier, they had pulled a tick off the baby’s knee, and that the tick had been there for two to three hours. READ MORE.