TOUCHED BY LYME: Read excerpt of “Chronic,” long-awaited book by Phillips and Parish 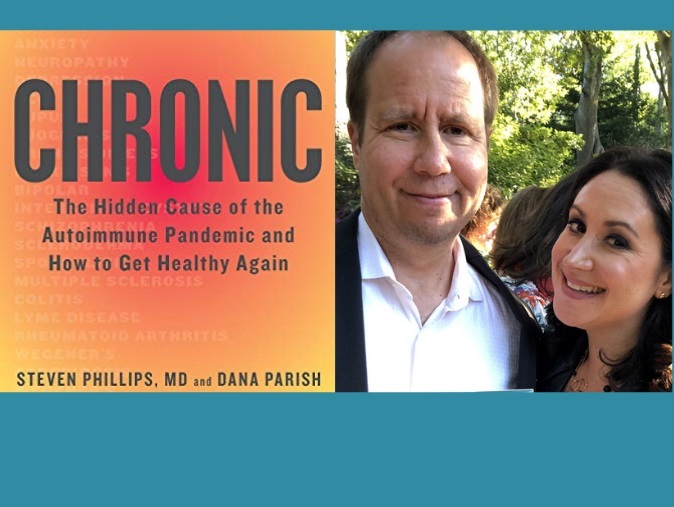 Chronic: The Hidden Cause of the Autoimmune Pandemic and How to Get Healthy Again is a long-awaited book by Dr. Steven Phillips and Dana Parish.

The co-authors–a prominent Lyme doctor and a singer/songwriter/advocate who used to be his patient–are well known in the Lyme community. So, it’s initially curious that the book title doesn’t mention the words “Lyme disease.”


But that’s explained early on. In their text, Phillips and Parish use the term “Lyme plus” for the dizzying constellation of microbes that can result in a wide variety of persistent symptoms and autoimmune conditions. Lyme disease  (by itself) may be only one part of the complex picture.

Chronic is divided into two main sections. The first part, “The Root,” debunks commonly held myths about Lyme+ and shows how mainstream medicine has so often gotten its facts wrong.

The second part, “The Remedy,” offers practical advice on how to get properly diagnosed and looks at an assortment of treatments that may be useful.

The following excerpt from the book is taken from the Chapter called “The Myths That Get in the Way.” (This passage includes two myths. The chapter explores many more.)

FACT: Of course, we want to minimize risks to patients from treatments and maximize benefits. Therapies for most serious diseases can have serious side effects, but the risk of fatality from long-term antibiotic therapy is quite low. Far more deaths have been caused by Lyme+ than by its treatment. The risk of fatal outcomes in the treatment of inflammatory diseases with immunosuppressive agents, and cancer with chemotherapy, is far higher than for antibiotic therapy, but the difference in those diseases is that they are accepted by the CDC as legitimate, therefore the risk is deemed justifiable.

One of the earlier case reports revealing how Lyme disease can survive antibiotic treatment was published by the University of Chicago’s Journal of Infectious Diseases in 1988. A group of Swiss scientists successfully grew B. burgdorferi from joint fluid three months after a fifteen-year-old girl was treated for Bell’s palsy (facial paralysis) due to Lyme disease. She’d been bitten by a tick in Austria but experienced none of the typical symptoms — no rash, malaise, fever, or musculoskeletal pain. It wasn’t until one side of her face drooped that doctors suspected Lyme, after which she underwent the conventional, two-week antibiotic treatment. After initially improving, she relapsed a couple of months later, developing sudden, unexplainable arthritis in her right knee. Her doctors finally found B. burgdorferi in her joint fluid and ordered another round of antibiotics, concluding that a two-week course of antibiotics for Lyme was inadequate.

In 1993, a more dramatic report was published out of the Department of Medicine at Fitzsimons Army Medical Center in Aurora, Colorado. There, a twenty-four-year-old patient with Lyme arthritis continued to relapse when the antibiotics were stopped. Despite years of oral and IV antibiotics, the researchers found B. burgdorferi in the patient’s joint tissue and joint fluid—proof again that the bacteria can escape the assault of antibiotics. But the IDSA guidelines fail to take studies like these into account.

To understand the importance of considering novel treatments to address complicated health challenges — in this case, long-term anti-microbial therapy for Lyme+ — it helps to consider other areas in medicine where out-of-the-box thinking eventually revolutionized the field, but only after hard-won battles. It was long thought, for example, that stomach ulcers were caused by diet and stress, for which bland foods, antacids, and meditation were prescribed, without benefits. Such patients went on to suffer, some requiring surgery, and some dying from bleeding ulcers or stomach cancer. In 1982, the Australian physicians Robin Warren and Barry Marshall found a link between Helicobacter pylori infection and ulcers, concluding that the bacteria — not spicy foods and a mean boss — were to blame.

In 1983, they presented a paper to the Australian Gastroenterological Society, but never finished their presentation because they were laughed off the stage. Barry Marshall took drastic steps. He had a baseline endoscopy of his stomach performed, which was normal, and then drank a batch of H. pylori. Soon after, he developed severe gastritis that was documented by another endoscopy. He then took antibiotics, which resolved his condition, documented again by endoscopy. It was because of this desperate tactic that Marshall and Warren were able to turn around medical dogma within fifteen years, which is light speed for a complete about-face in medical doctrine. In the past, other physicians had tried to change medical dogma but couldn’t break through the medical community’s wall of arrogance.

For example, in 1940, Dr. A. Stone Freedberg, of Harvard, found the spiral-shaped bacteria in the stomachs of ulcer patients, but wasn’t believed. In 1946, Dr. Constance Guion presented a paper on treating stomach ulcers with the antibiotic chlortetracycline, but her colleagues at Cornell Medical School denounced her so mercilessly that she ditched her thoughts of treating ulcers with antibiotics. And then there was John Lykoudis, a physician from a small town in Greece, who developed a bleeding ulcer and cured himself with antibiotics. Since they worked for him, he treated his ulcer patients with antibiotics too, and found they were effective. He soon had patients flying in from all over the world to have him treat their stomach ulcers with antibiotics. In the 1950s, he presented his work to professors at several Greek medical schools but was met with laughter. He then contacted the Greek minister of health, the prime minister of Greece, and eventually the chairmen of the department of medicine at Athens Medical School, to no avail. He was treated like a pariah. Unable to get his work published, he died without vindication, never getting to see Drs. Marshall and Warren win the 2005 Nobel Prize for their discovery.*

The state of medical dogma today regarding Lyme+ is worse than it was for stomach ulcers before Marshall and Warren took the stage. The Lyme+ doctrine is similarly based on obsolete, erroneous data, but far more riddled with financial conflicts of interest, as follows:

* In 1997, the CDC, with other government agencies, academic institutions, and the medical industry, launched a national education campaign to inform health care providers and consumers about the causal link between H. pylori and ulcers. Until word got out, millions suffered needlessly, including family members of our own, having no idea that their cure was an inexpensive prescription away. At the time the national education campaign spread the news, nearly 90 percent of patients were still subscribing to the old dogma and relentlessly popping antacids and avoiding their favorite foods to no avail.

MYTH: The medical establishment has no idea what causes Post-Treatment Lyme Disease Syndrome or what the best treatment for it is.

FACT: If you’ve been dealing with chronic Lyme+, then chances are you’ve heard this statement. As previously noted, PTLDS is a misleading term given the wealth of published information that these organisms can persist — and indeed continue to thrive —despite drugs that were initially thought to kill them but don’t. It’s an illogical construct. Think about it: What are the chances that a second disease of mysterious origins (i.e., PTLDS or an autoimmune disease), but with the same symptoms as the first disease, would come and replace the first disease? What are the odds, in light of published evidence that the pathogens that cause the first disease survive after both short- and long-term antibiotics? Consider also that there are numerous other chronic bacterial infections that require long-term combination antibiotic therapies: tuberculosis, leprosy, chronic coxiella, brucellosis, and Whipple’s disease, to name a few, some of which are included in what we term Lyme+. Many of the other members of Lyme+ are no different and should be included in the same category.

The consequence of referring to patients with persistent symptoms of Lyme disease after a short course of antibiotics as having Post-Treatment Lyme Disease Syndrome is a fait accompli, in that such patients, now desperately searching for answers on the CDC website, may feel that antibiotics can’t possibly help them. You may already believe this if you’ve ever gone to the CDC’s website. But if someone with Lyme+ is led down the path of PTLDS, this will only delay care further and increase the likelihood of subsequent antibiotic treatment failure. Late-stage Lyme+ is difficult to treat. Because semantics guide patient care, we believe the term Post-Treatment Lyme Disease Syndrome is harmful, and in some cases fatal, and it should not be used.

Excerpted from CHRONIC: The Hidden Cause of the Autoimmune Pandemic and How to Get Healthy Again © 2020 by Steven Phillips, MD, and Dana Parish. Reproduced by permission of Houghton Mifflin Harcourt. All rights reserved.

This book can be ordered in print, e-book, and audio formats.