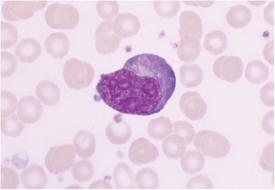 Ehrlichiosis (HME) was originally thought to be only an animal disease. It was described in humans in 1987 and is now found in 30 states, predominately in the southeast, south-central, and mid-Atlantic states, Europe and Africa. Anaplasmosis (HGE)in humans was first identified in 1990 in a Wisconsin man. Before that it was known to infect horses, sheep, cattle, dogs and cats. It occurs in the upper midwest, northeast, the mid-Atlantic states, northern California, and many parts of Europe. Studies suggest that in endemic areas as much as 15% to 36% of the population has been infected, though often it is not recognized.

Diagnosis is limited by our current ability to test for only two species. Ehrlichia parasites multiply inside host cells, forming large mulberry-shaped clusters called morulae which doctors can sometimes see on blood smears. The infection still can easily be missed. The doctor may suspect ehrlichiosis/anaplasmosis in a patient who does not respond well to treatment for Lyme disease.

The treatment of choice for ehrlichiosis/anaplasmosis is doxycycline, with rifampin recommended in case of treatment failure.