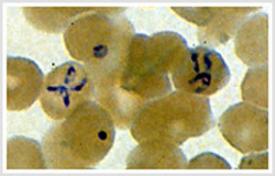 Babesiosis is an infection caused by a malaria-like parasite, also called a “piroplasm,” that infects red blood cells. Babesia microti is believed to be the most common piroplasm infecting humans, but scientists have identified over twenty piroplasms carried by ticks.

Ticks may carry only Babesia or they may be infected with both Babesia and Lyme spirochetes. People can also get babesiosis from a contaminated blood transfusion.

The first case of babesiosis was reported from Nantucket Island, Massachusetts, in 1969. Since the late1980âs, the disease has spread from the islands off the New England coast to the mainland. Cases have also been reported all across the United States, Europe, and Asia.

Symptoms of babesiosis are similar to those of Lyme disease but it more often starts with a high fever and chills. As the infection progresses, patients may develop fatigue, headache, drenching sweats, muscle aches, nausea, and vomiting. Babesiosis is often so mild it is not noticed but can be life-threatening to people with no spleen, the elderly, and people with weak immune systems. Complications include very low blood pressure, liver problems, severe hemolytic anemia (a breakdown of red blood cells), and kidney failure.

Blood smears may be examined under a microscope to try to identify the parasite inside red blood cells, however this method is reliable only in the first two weeks of the infection. Commercial tests currently work for only three species of Babesia, and there are likely many species yet to be discovered. The PCR (polymerase chain reaction) test can detect babesia DNA in the blood. The FISH (Fluorescent In-Situ Hybridization) assay can detect the ribosomal RNA of Babesia in thin blood smears. The patientâs blood can also be tested for antibodies to Babesia. It may be necessary to run several different tests and negative results should not be used to rule out treatment.

Babesiosis is treated with a combination of two types of anti-parasite drugs, atovaquone (Mepron, Malarone) plus an erythromycin-type drug (azithromycin, clarithromycin, or telithromycin). Long-standing infections may need to be treated for several months, and relapses sometimes occur and must be retreated.