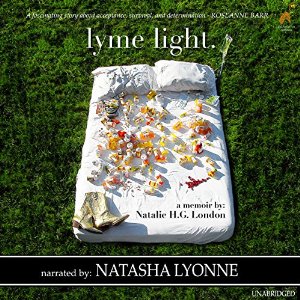 In May 2014, I reviewed lyme light: a memoir, by Natalie London.  It’s now available as an audio book, narrated by Natasha Lyonne from the Netflix series “Orange is the New Black.” I bring it to your attention again, since many people with Lyme find it easier to listen to audio books than to read the printed page. The following review is adapted from my earlier one.

Natalie London channels Roseanne a lot in lyme light: a memoir. The 222 episodes of that comedy show, along with 239 installments of Beverly Hills 90210, played a huge part in her life. You see, the fictional family and friends she found on those shows got her through a very difficult childhood, which included abuse and abandonment by her alcoholic father. And then, years later, when she was alone and almost dying from Lyme disease, those TV companions kept her going again.

Twelve years ago, London was an up-and-coming musician and successful college student in New York, when suddenly things went horribly wrong, both physically and mentally. Weird pains, hallucinations and difficulty thinking. Feeling disconnected from what was happening around her.

And by the way, shortly before all this started happening she was bitten by ticks on two different occasions. She had multiple bull’s-eye rashes. None of her doctors wanted to hear about it, though.

School got harder. She writes: Where did all the words go? They used to be right there at the tip of my… of my… what is the name of that thing in my mouth?….My only peace was blacking out, there was no longer such thing as sleep. …By October I found myself on the hard and cold wood floor of my apartment unable to move. There was nowhere left that was safe.

A school psychiatrist prescribed tranquilizers and anti-depressants: He told me these episodes I was experiencing, the delusions, the itching to get out of my skin, was normal anxiety and depression caused by the stresses of senior year. It was commonplace to be worried about graduating, stepping into the responsibilities of the real world, it was simply… senioritis.

The symptoms got worse. Shortness of breath, heart palpitations, fainting spells. She left school and returned home to Southern California.

Via a circuitous path, eventually Natalie discovered she had Lyme disease and co-infections, and began a grueling treatment regimen. That’s when Roseanne and the gang from Beverly Hills came back into her life again.

Not just about Lyme disease, the book’s raw and edgy story line also holds up a mirror to popular culture. As this young woman takes a terrifying journey into “a part of my brain I never in my life would have believed existed,” we also learn what songs she’s humming and what bits of TV dialogue pop into her mind at odd times.

Today, Natalie is back in the music scene, leading a band called “Hey, King!” She periodically participates in Lyme awareness events, such as 2015’s Ticked Off Music Fest in Los Angeles.

Lyme Light: A Memoir is a compelling personal narrative. Click here to listen to a clip of the recently released audio book.