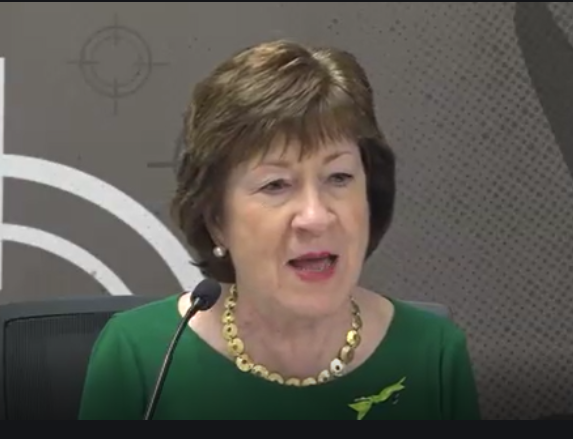 U.S. Senator Susan Collins of Maine, the Chairman of the Aging Committee, convened an official Senate field hearing on September 5, at the University of Maine Cooperative Extension Diagnostic and Research Laboratory Tick Lab.

Immediately prior to the hearing, Senator Collins toured the lab, which provides tick diagnostics, offers public outreach, and conducts applied research on ticks in Maine.

The hearing, titled “The TICK Act: An Urgent Public Health Response to Tick-Borne Diseases,” explored the growing public health crisis of Lyme disease and other tick-borne diseases. The legislation would apply a three-pronged approach to tackle Lyme and other tick and vector-borne diseases.

“I greatly appreciated our extraordinary group of witnesses who took the time to share their scientific expertise as well as their personal experiences with Lyme disease,” said Senator Collins.

“I was also very impressed to see firsthand the outstanding work being done by the University of Maine Cooperative Extension’s Tick Lab to better understand the diseases ticks carry and to protect Mainers.”

She continued: “A correct and early diagnosis can reduce costs and improve the prognosis, but we have a long way to go. Lyme disease was identified more than 40 years ago, yet there is still no gold standard for treatment. Existing prevention, education, and diagnostic efforts are helpful but remain fragmented. The TICK Act would help unite our efforts against ticks.”

Chris Philbrook of Cumberland contracted Lyme disease in 2007 on a trip to Hogback Mountain in Virginia. He could barely move a muscle the next day and experienced debilitating pain and partial paralysis of his face.

After a CAT scan showed nothing abnormal, Mr. Philbrook visited a dentist for his tooth pain, who said his symptoms could be due to Lyme disease. Mr. Philbrook was tested for Lyme, but the results came back negative. It was only after Mr. Philbrook’s symptoms progressed and paralysis affected both sides of his face that he received a spinal tap and was properly diagnosed.

“I didn’t realize how important smiling was to my mental health until I couldn’t do it anymore,” said Mr. Philbrook. “I was lucky that my dentist spoke up, that I had a spinal tap—which is not a normal Lyme testing protocol—and that my Lyme disease was treated quickly, within the first month and a half. I’m happy to say that after my antibiotic treatment, I was cleared of the disease, although residual effects remain, mainly sleep disturbances and facial paralysis.”

Unlike Mr. Philbrook, Paula Jackson Jones of Nobleboro faced a frustrating diagnostic odyssey after she contracted Lyme disease while doing yard work in 2009. Over the next two years, she was misdiagnosed by 23 doctors and specialists. Although Ms. Jackson Jones tested negative for Lyme disease on four occasions, she was finally diagnosed with Lyme, Babesia, Bartonella, Rocky Mountain Spotted Fever, and Erlichiosis after a clinical examination and additional blood work and tests.

Dr. Sean McCloy provided a physician’s perspective on the difficulty of diagnosing Lyme. As a young resident at Maine Medical Center, he felt equipped to spot the classic signs of the disease, such as the bull’s-eye rash, but he began seeing more patients who didn’t fit the typical scenario. Dr. Peterson described how he became a “detective doctor” to determine how to help his patients and learned that there is no one-size-fits-all approach that works for every case.

Dr. Jim Dill, a Pest Management Specialist who oversees UMaine’s Tick Lab, spoke about the work the UMaine Cooperative Extension is doing to minimize the occurrence and spread of ticks and tick-borne diseases in Maine.

The Tick Lab monitors tick populations and allows Maine residents to send tick samples for identification and testing. Dr. Dill noted that funding for tick research has been a challenge, but said the TICK Act will “inject a much-needed investment” that will allow the Tick Lab to expand its work.

Dr. Lyle Petersen, the Director of the Division of Vector-Borne Diseases at the Centers for Disease Control and Prevention’s (CDC) National Center for Emerging and Zoonotic Infectious Diseases, spoke about the CDC’s efforts to reverse the upward trend in vector-borne disease by focusing on preventing infections.

He pledged that the CDC will continue supporting state and local jurisdictions’ initiatives to address tick-borne disease, and he expressed his commitment to supporting the development of an effective vaccine.

Last year, an estimated 450,000 Americans were diagnosed with Lyme disease, a staggering 1,400 percent increase since 2003. In the last year in Maine alone, there were approximately 1,400 new cases of Lyme disease, a sharp increase from the 752 cases in 2010. Other tick-borne diseases are also on the rise in Maine.

Maine has the highest rate of Lyme disease in the country, with per capita diagnoses 10 times higher than the national average. Tick-borne diseases disproportionately affect people over age 65, who are afflicted at higher rates than any other age group.

You can watch a video recording of the hearing here:

SOURCE OF PRESS RELEASE: The Office of US Senator Susan Collins