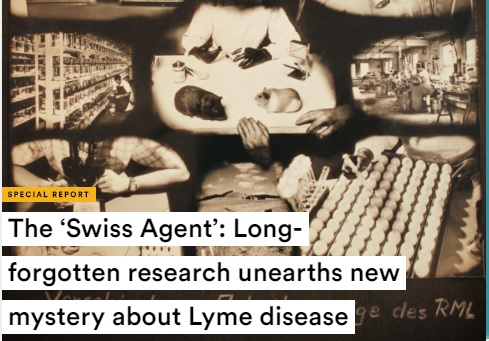 STAT, a health and science publication affiliated with the Boston Globe, has published an explosive article about a long-ignored factor that may hold a clue to the mystery of Lyme disease.

The tick hunter was hopeful he had found the cause of the disabling illness, recently named Lyme disease, that was spreading anxiety through leafy communities east of New York City. At a government lab in Montana, Willy Burgdorfer typed a letter to a colleague, reporting that blood from Lyme patients showed “very strong reactions” on a test for an obscure, tick-borne bacterium. He called it the “Swiss Agent.”

But further studies raised doubts about whether he had the right culprit, and 18 months later, in 1981, Burgdorfer instead pinned Lyme on another microbe. The Swiss Agent test results were forgotten.

Now STAT has obtained those documents, including some discovered in boxes of Burgdorfer’s personal papers found in his garage after his death in 2014. The papers — including letters to collaborators, lab records, and blood test results — indicate that the Swiss Agent was infecting people in Connecticut and Long Island in the late 1970s. READ MORE.