TOUCHED BY LYME: When pain is simply unbearable 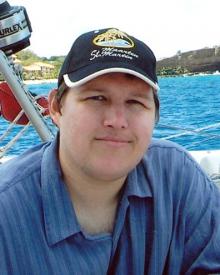 As a kid growing up in southern California in the 80s and 90s, Bryan Bower was a bit of a daredevil: BMX biking, rollerblading, skateboarding, snowboarding—never a show-off, but always pursuing his jumps and thrills. As a college student, he discovered a new passion, rock climbing. He went everywhere with his new best friend and climbing buddy Rhyan. Joshua Tree, Tahquitz, The Needles and Malibu Canyon were southern California favorites. In his early 20s, Bryan started training to climb Yosemite's El Capitan, practicing with one of those folding ledges that you haul up and sleep on when you’re half way up the 3,000-foot granite face. All that came to a screeching halt about six years ago

when Bryan was struck by a series of bizarre symptoms: debilitating headaches, brain fog, intense pain in his spine and shoulders, night sweats, difficulties with his balance, sleep disturbance and depression. That prompted a series of doctor appointments which, after many twists and turns, eventually led to a diagnosis of Lyme disease. By this time, the infection was deeply entrenched in his brain and central nervous system.

His was a dramatically changed personal landscape. There were different kinds of rocks to climb now, boulders named severe neuro-Lyme, co-infections, and brutal suffering.

He would try different doctors and different treatments through the years, even traveling to Mexico for alternative therapies. Sometimes, he could muster some of that old daredevil energy to dive headlong into a new treatment protocol. Sometimes he couldn’t.

Occasionally, there would be some improvement in his physical situation. When it didn’t last, he’d pour his agony and frustration into the written word, on his blog or in anguished poetry.

Previously a devout Christian, Bryan felt utterly forsaken by the God that had once offered solace and refuge.

In the last few years, Bryan spent most of his time in bed, trying to distract himself from blinding pain that even heavy-duty meds couldn’t relieve. He’d surf the web on his laptop, searching for alternative Lyme treatments while lying on an electro-magnetic mat. He’d keep TV, Netflix, or video games flickering on the big screen in front of him, in vain hope of even momentary diversion from the pain.

Friends and relationships from the past had pretty much fallen by the wayside. His mom and dad gave love and support and tried to lessen the isolation as much as they could.

Yet, nothing he tried could carry him away from the pain. Ultimately, according to his family, Bryan “just wanted the pain to stop.”  On May 2, 2011, he ended his own life, leaving his parents to read the following words he’d penned for them earlier.

I never knew Bryan, but his is the fourth Lyme-related fatality I’ve learned about recently. It makes my heart sick. Wake up, America! Tick-borne diseases are stealing our children. While the medical establishment, insurance companies, and government health officials play politics and pretend that Lyme disease is no big deal, or worse – a complete sham – people like Bryan are abandoned by the institutions that are supposed to help them.

A speaker at the recent webinar on Lyme by the Centers for Disease Control made the astonishing assertion that long-term neuroborreliosis would eventually “resolve” on its own, without any treatment whatsoever. Tell that to Bryan’s heartbroken family. Tell that to untold thousands of Lyme patients who live with intractable pain and other unrelenting symptoms.

The loss of this young man makes me both sad and angry. We in the Lyme community owe it to Bryan and others like him, to channel such emotions into meaningful action. Tick-borne disease is taking a toll on our society that will not “resolve” on its own.

Click here to read Bryan’s memorial page with some of his poetry.