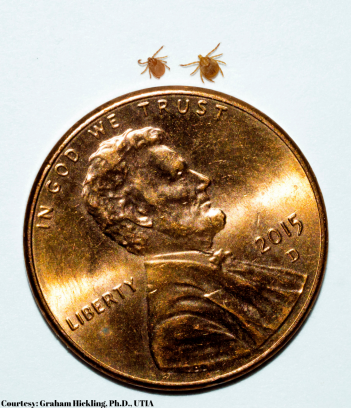 According to the Tennessee Department of Agriculture, the tick has now been found in Knox, Jefferson, Claiborne, Cocke, Putnam and Sevier counties. Previously, they had been identified in Union and Roane counties.

“Tennessee has a relatively large amount and variety of ticks,” said Dr. R.T. Trout Fryxell. He is Associate Professor of Medical and Veterinary Entomology for the University of Tennessee Institute of Agriculture.

“While it is always important to be diligent and keep an eye out for all ticks, the unique biology of the Asian longhorned tick helps this species to establish quickly and become a problem.”

So far, the CDC has found no evidence that the tick has transmitted pathogens to humans or animals in the United States. However, it has sickened humans and animals in other parts of the world.

Officials say cattle and canines are particularly susceptible to tick bites. They advise livestock producers to be vigilant when purchasing animals, apply a tick treatment to cattle prior to bringing them to your farm, and always use best practices for herd health. Dog owners should provide their animals with a tick preventative and check for ticks.

In the US, the Asian longhorned tick was first discovered in New Jersey. According to the CDC, it has now also been found in Arkansas, Connecticut, Delaware, Kentucky, Maryland, North Carolina, New York, Pennsylvania, Virginia, and West Virginia.

Click here for more information about types of ticks