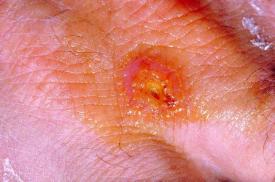 Routine tick monitoring last week turned up a Pacific Coast tick infected with tularemia. Also known as rabbit fever, it's a serious bacterial infection which can be spread to humans via tick bite or through direct contact with infected animals. The Pacific Coast tick is different from the western black-legged tick, the primary carrier of Lyme disease.

From the Southwest Riverside News Network

The latest wildlife-borne disease to watch out for is Tularemia, also known as Rabbit Fever, which was found on a Pacific Coast Tick near the Los Penasquitos Canyon Preserve, the county Department of Environmental Health announced Friday.

The tick was discovered Tuesday during routine monitoring.

“Tularemia is a bacterial, vector-borne disease that can be transmitted to humans through the bite of infected ticks, or through direct contact with an infected animal such as rabbits and other rodents,” said Jack Miller, director of the county Department of Environmental Health.