TOUCHED BY LYME: After a 62-mile bike ride for Lyme research, she’ll be at SF Lymewalk Sept. 26 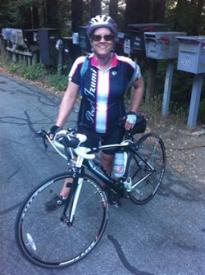 For over 10 years, Carol E. was too fatigued to ride a bicycle at all. Now, after Lyme treatment, she’s cycling—and walking—to increase public awareness, as well as raise money for Lyme disease research.

When Carol E. was in her 20s and early 30s, she was physically fit, active, and adventurous. She liked to cycle long distances and kayak in the ocean. Then, about 15 years ago, she recalls, her energy slowly dwindled away. She felt tired a lot, less inclined to pedal or paddle. After a couple of pregnancies, her fatigue was worse than ever. It was easy enough to say parenting two active children was the culprit. But, she’d wonder, should it wipe her out this much?

Other symptoms showed up. Brain fog, headaches, digestive upsets and migrating joint pain would wax and wane. But the fatigue just…wouldn’t…go…away. Often, it took every ounce of strength she could muster to somehow get the kids off to school in the morning. Then she’d go back to bed for several hours. She was stuck in a morass and couldn’t get herself out of it. Life as she’d known it seemed over.

One day, Carol happened to hear somebody speaking about Lyme disease. She was thunderstruck! Could this be why her body was acting so strangely? She did some internet research, talked to people, and finally found a Lyme-literate MD, who diagnosed her with Lyme disease and additional bugs and viruses as well.

A year and half after starting treatment, Carol reports, “My energy returned.” This past summer, she realized with a start that she could ride a bicycle again. Even up the steep hill on La Honda Road in Woodside, famously difficult for cyclists.

“I wanted to do something to prove I was back,” she says. She started working with a certified bike coach, to get into shape for a 62-mile-ride from Carmel to Hearst Castle, along scenic Highway 1. She created a CALDA fundraising page, dedicated both to her Sept. 6 bike ride and Sept. 26’s San Francisco Lymewalk, asking friends and family to donate to Lyme disease research on her behalf.

And on Sept. 6 she completed her magnificent bike ride. “There were 6,000 feet of elevation gained and lost,” she explains. “It took five and a half hours, with two rest stops.” The weather was so foggy, she seemed cocooned in her own magical world—just her, the bike, and the road. Any special challenges? “I had to bring my own food, since the snacks they supplied weren’t gluten-free. Nutrition has played a big part in my return to health.”

Carol’s friends and family have rallied around her, donating more than $2700 to her fundraising page. She plans to attend Sunday’s San Francisco Lymewalk, and relishes the additional opportunity to help educate the public about Lyme disease.

“I don’t know why I’ve been lucky enough to recover so well,” Carol says. “I know many people with Lyme who have been under treatment longer and still have a long way to go.”

She hopes friends from her home community of Menlo Park will join her and her family at Sunday’s San Francisco Lymewalk. Walkers will meet at 1pm at the corner of Larkin & Fulton, next to the Main Library. (Civic Center BART/Muni station). After the walk, educational sessions about Lyme disease will take place in the library.

Click here for detailed information about the San Francisco Lymewalk.

Click here for more information about the 2010 CALDA Lymewalks.