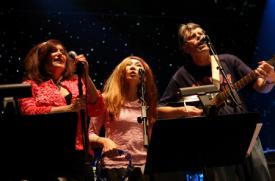 In an interview with the St. Petersburg Times, author Amy Tan says seizure medication and antibiotics keep her Lyme symptoms under control. "I have a new definition of healthy," Tan says. "If you can do what you want, you're healthy. So I'm healthy."

From an article in the St. Petersburg Times:

Tan, 58, is very much a living writer despite a serious health scare several years ago. In 1999, she began suffering mysterious symptoms: headaches, joint pain, loss of memory and concentration, seizures, even hallucinations and brain lesions. For anyone, such symptoms would be debilitating; for a writer, they were catastrophic.

She underwent countless tests, surgery, the advice of 10 specialists. Her own research led her to believe she might have Lyme disease, an infection carried by ticks, but doctors insisted it was unlikely because of where she lived (although Lyme disease has been reported in every state). After several years she was finally diagnosed with late-stage neuroborreliosis — otherwise known as Lyme disease.

Seizure medication and antibiotics keep her symptoms under control. “I have a new definition of healthy,” Tan says. “If you can do what you want, you’re healthy. So I’m healthy.”