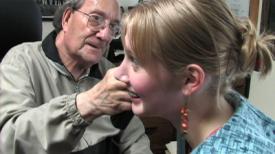 The Connecticut Medical Examining Board will vote on the fate of Lyme-treating pediatrician Dr. Charles Ray Jones on February 16. Here is an update on the situation, along with the history of the action against him.

It is time to update you once again on the status of the charges that I have been fighting before the Connecticut Medical Examining Board (CMEB).  I cannot thank you enough for the many expressions of support and encouragement that you have been sending my way over the past several months.  These have made a huge difference to me, enabling me to maintain my determination to prevail.

I also extend a hearty invitation to you to attend the next meeting of the CMEB, which will take place on February 16, 2010 at 1:30 at the Department of Public Health Complex, 470 Capitol Avenue, Conference Room C, Hartford, CT 06134.  At that time, the Board will vote on the recommendations of the panel which has been hearing the most recent set of charges brought against me.

In this update, I will focus on the most recent developments in what has become a long series of charges and investigations by the CMEB and Connecticut Department of Health (CT DPH).  For more detailed background information, I refer you to my letter dated September 5, 2008 , which is posted on the following website:  www.lymesite.com

Currently, there have been two separate and distinct cases against me.  The original case is under appeal, and the second case pertains to a new set of charges regarding a different set of patients.

In addition to this, we have learned that the court-appointed monitor has brought a number of complaints about me to the CMEB, which appear to be based on his reliance on the IDSA guidelines as the alleged “gold standard” for the diagnosis and treatment of Lyme disease.  These currently are under investigation, but at this point no formal charges have been filed in relation to them.

I was brought up on a series of charges pertaining to two children from one family in Nevada, whose parents were involved in a post-divorce decree custody dispute.  The children involved in the case were doing quite well and there was no allegation of harm done to either of them as a result of their treatment.

In its decision of December, 2007, the Connecticut Medical Examining Board (CMEB) imposed a $10,000 fine, a reprimand and two years of monitored probation.  Despite these disappointing recommendations, this case was not lost.  My license to practice medicine was not suspended or limited.

However, the CMEB introduced a very restrictive four part standard of care for Lyme disease at the very end of the proceedings.  Left unopposed, this test would set a very dangerous precedent, and could be used against other doctors to shut down the treatment of chronic Lyme disease.  It clearly had to be appealed.

Appeal of the First Case:

Most of the charges that I was found “guilty” of were stayed, or suspended, pending the outcome of the appeal, including the four part standard of care.  The one exception was the monitoring requirement.  I was required to find and pay for a board-certified pediatrician, licensed in the state of Connecticut, to conduct periodic chart reviews at my office for a period of two years.  This was not an easy task:  We contacted over 80 pediatricians before the current monitor was found; he was then approved by the CT DPH.

The grounds for the appeal have been described in my previous letter.   One of them pertains to the discovery of significant bias on the part of one of the panel members, Dr. Senechal, who was recognized by a set of parents who filed affidavits stating that he had expressed very significant bias against me and other Lyme literate physicians, including the statement that doctors who treat Lyme are quacks.

A hearing was held in Superior Court to review the question of the panel member’s bias. The judge rejected our arguments. The case is now on appeal to the Connecticut Appellate Court; the brief in support of my position is due in April.

The Department of Public Health then filed another series of complaints against me.  This set of charges differs from the first case in that it involves three separate families, with the respective cases conjoined into one proceeding.

Although the exact facts differ, the cases are similar in that two of them involve non-custodial fathers filing complaints.

In none of the cases were any of the children involved harmed; indeed, as with the first case, the children all are doing very well.

Following lengthy hearings concluding last May, a three-member panel has issued its “proposed memorandum of decision” (MOD).  This will be voted on by the CMEB on February 16, following the presentation of oral arguments by both attorneys:

In this case, the panel has denied that charges have been brought against me because I am a Lyme specialist.  Instead, it has characterized its findings as generic and pertaining to

medical practice as a whole.  This is why we have not been able to utilize the recently passed physician protection bill in Connecticut.

Nevertheless, it is rather difficult to understand why such matters should have ever reached this level, or why their two expert witnesses were specialists in tickborne diseases.  There have been no patient complaints, other than disaffected fathers involved in contested custody or divorce proceedings, and no harm has come to any of the children, who in fact have done well.

Once again, the panel has not recommended that my medical license be revoked.  They have, however, recommended the following sanctions:

Why I Continue to Fight:

Some of you have expressed dismay that the Connecticut Department of Public Health has spent so much taxpayer money on these charges.  You have been concerned that they will continue to bring charges against me until I am forced to close my office.

This process has been undeniably stressful.  It has been painful to see so much time, energy and valuable resources being expended on my defense.  I continue to believe, however, that it is critical for me to continue to fight these charges and to prevail:

         We must stand up for what we believe and know to be right in the matter of diagnosis and treatment of tick borne disease.

         I am painfully concerned about the lack of effective care for children afflicted with tick borne disease.  Because I decided to fight these charges when all of this began some six years ago, several thousand additional pediatric Lyme patients have received an appropriate diagnosis and treatment for their tickborne disease.

         A successful outcome for me will both hearten and protect other physicians who wish to diagnose and treat Lyme disease comprehensively, and will encourage other pediatricians in particular to train with me.

         We must send a clear message to health departments across the country that we will not be bullied, or allow our right to medical treatment to be trampled.

I continue to be grateful for the excellent defense that Attorney Elliott Pollack has been providing, and to everyone who has made this possible through donations to my legal defense fund.   Please note that Attorney Pollack has achieved some significant victories:  my license has not been revoked and, most recently, the decision to throw out the testimony of Dr. Zemel on the grounds that he is biased, will most likely put an end to his usefulness as an expert witness in proceedings against other LLMD’s.

The legal representation necessary to oppose these charges has been very extensive and complex:

This struggle has been costly, and I will continue to require your financial support in order to prevail.  We have known from the outset that Pullman & Comley does not provide pro bono legal services, and Attorney Pollack is accountable to the partners in his firm.

To date, the cost of my legal defense over these past six years has amounted to approximately $700,000, most of which has been funded by donations to the legal defense fund.  It is extremely painful to think of the resources of the Lyme community being spent in this way.  At the same time, it is important to recognize that these charges are not unusual or excessive for a legal defense that has been as complex and lengthy as mine has been.  There is a current outstanding balance of approximately $80,000.  This will increase over the next few weeks as a result of the ramped up legal activity that will be necessary to address the CMEB decision, the monitor’s complaints and the ongoing appeal.

Ordinarily, Pullman & Comley does not allow clients to carry an unpaid balance on their account.  They have been impressed by the stream of donations that so many of you have been sending, and have been unusually flexible in this regard.  Each time that the unpaid balance grows, however, my legal representation is in jeopardy.  It is necessary to demonstrate once again that the legal defense fund is solvent, and will be able to meet the cost of my legal defense.

Because of this, I am asking you to make a donation to my legal defense fund, in whatever amount that your circumstances will permit.  I hope that you will continue to find the means to support this fight, despite the hardships which I know that so many of you already live with.

The current instructions for donating to my legal defense fund are noted below.  These instructions also are posted on Kay Lyon’s website:

For those of you who may have additional questions not answered by this update, I invite you to send them to me by letter or by fax:  203-772-0682.  Please reserve for telephone calls for urgent matters only, given the very high volume of patient calls that the office receives.

HOW TO DONATE TO THE LEGAL DEFENSE FUND:

Note "gift" in the memo field

To use PayPal to donate to the defense fund, click here.