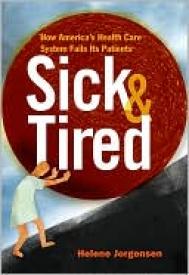 "Jorgensen’s personal story is (sadly) not uncommon in the Lyme world. But she uses it to demonstrate a larger point. This lady went into her Lyme journey with a Ph.D. in economics, trained to unravel bureaucratic red tape and the ins and outs of labor-related issues like health care benefits."

In 2003, a 37-year-old labor economist named Helene Jorgensen flew to Montana to attend a conference. Once there, she went hiking, got bitten by a tick, and—POW—her life was never the same again.

Though it would be years before events were properly sorted out, here’s what apparently happened. Jorgensen had previously been bitten by many ticks, and probably had already acquired an unrecognized Lyme disease infection before this trip. (Odd symptoms had been rearing their heads for months before her visit to Montana, all attributed to other causes.) Then the Montana tick added something new to the mix—the blood parasite babesia duncani—and what a wallop it packed.

Within 24 hours of the bite, Jorgensen was a changed woman: feverish, nauseated, cognitively impaired, and barely able to walk due to exhaustion and poor coordination. She managed to return home and began what would turn into a six-year medical odyssey for proper diagnosis and treatment.

Right off the bat, her primary care doctor diagnosed her with Lyme and prescribed 10 days of oral antibiotics. When her symptoms only worsened, he referred her to an infectious disease specialist, who said she had neurological Lyme and gave her the IDSA-approved treatment of three weeks of IV therapy. Her symptoms improved and the ID doctor pronounced her cured.

But that was not the end of her problems. Old symptoms returned and new ones emerged. Like many other victims of tick-borne disease, she came to the realization that her doctors didn’t really understand what was happening to her. She started researching on her own, and eventually found a Lyme specialist who did not believe she was cured. He also tested her for coinfections, and found her highly positive for a strain of babesia.

Jorgensen’s personal story is (sadly) not uncommon in the Lyme world. But she uses it to demonstrate a larger point. This lady went into her Lyme journey with a Ph.D. in economics, trained to unravel bureaucratic red tape and the ins and outs of labor-related issues like health care benefits.

Her book, Sick & Tired: How America’s Health Care System Fails Its Patients (PoliPointPress, 2010) follows two strands. One is her personal health journey to become properly diagnosed and treated for tick-borne illness, all the while fighting to get insurance to pay for her care. The other brings her considerable expertise as an economist to bear, analyzing the institutional failures of the health care system every step of the way. Insurance, doctors, hospitals, drug companies, and diagnostic laboratories all play a part in making it more difficult for all patients—not just Lyme patients—to get the care they need. When you add the incendiary politics of Lyme disease on top of it, the picture looks especially bleak.

Jorgensen is good at illustrating what’s wrong the system—and there’s plenty wrong. She’s a little light regarding how to fix it. This book has been published just as Congress is arguing the merits and demerits of reforming health care insurance in this country. The book amply shows that insurance is only part of what’s broken. Many inter-locking aspects of our health care delivery system need serious overhaul.

At the close of the book, Jorgensen reports that after years of treatment, her health has largely improved and she is off antibiotic therapy. Though certain health problems remain, she is optimistic about her personal future. The larger health policy picture is decidedly less rosy, and she wonders if America can muster the political will to make the required changes. I wonder the same thing.

You can email this reviewer at dleland@lymedisease.org.