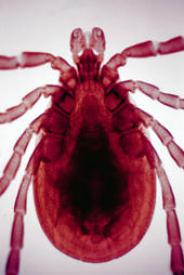 "I have a dog in this hunt. I used to be the healthiest guy I knew."

From the Willits News (Willits is in northern California):

When Lyme disease exploded in New England over 30 years ago, it was unknown in our neck of the woods, but things have changed. A confluence of climate and land use changes, coupled with animal and insect migrations, has produced a tick population in north county hills that carry not only Borrelia borgderferi, which causes Lyme disease, but half dozen or so germs that often co-infect people and contribute to the extreme difficulty in attempts to cure the Lyme disease.

If you don’t have the disease and don’t know anyone who does, you will, sooner or later.

In this overview, I will only be referring to late-stage, or chronic Lyme disease complex rather than acute Lyme disease, which can usually be cured with weeks to months of oral antibiotics.

When people get the ‘bull’s-eye’ rash following a tick bite, they have a reason to be medically evaluated and treated. Simple. But what happens if someone gets a tick bite and has no initial symptoms? It’s not a pretty picture; life and well-being can be destroyed, effective treatment can be hard or impossible to obtain, treatment and evaluation can be extremely expensive, and sufferers might discover the medical association that creates guidelines for treatment of infectious diseases denies they have a treatable infectious disease. Instead they may be told they have psychological issues.

It’s a real mess out there, and though there are rays of sun peeking through the fog, getting well can be elusive for those who have been ill for years. And there are a lot of us.

I have a dog in this hunt. I used to be the healthiest guy I knew. I took good care of myself, ate wisely, maintained athletic conditioning all my adult life, and cherished what I thought were longevity genes.

In retrospect, I was probably bitten by an infected tick in the late 1980s when I lived on Sherwood Road in woods crawling with ticks. I had no rash or other symptoms at the time, but by the beginning of the 1990s, I had developed some ‘weird’ symptoms involving my heart and inner ear function. These seemed to pass with time and some medication, though with no antibiotics and no consideration I might have Lyme.

Then in 2000, I developed severe inner ear symptoms, which ear, nose and throat specialists could not specifically diagnose. That waned, and by the end of 2005 I was back to heavy workouts and jogging at age 59.

By spring 2006, I was unable to stand for the first several hours of the day without holding on to a walking stick. I’d become totally debilitated with back pain, and hadn’t a clue why. Several months into this misery, I happened upon an old colleague who—when I told him that “aging sucks”—suggested I had Lyme disease. I replied, “No way!” Not me.

But it was true. And now, 3½ years later, I still struggle with what became far worse than I could ever imagine.

The Lyme disease bacterium loves nerves and cardiac tissue. Brain, nerves, and blood vessels, muscle, and joints become home to this infection. But the symptoms any one person develops are a function of many factors including individual genetics and the role of co-infections.

Late stage Lyme disease can look like anything from nagging aches and pains to devastating brain and life
-threatening heart syndromes. It’s not only a cause of massive suffering for those with the disease, it’s virtually impossible for most doctors to diagnose and treat. The reasons for this will be discussed in another article.

AUTHOR: Jon Sterngold is a Willits, CA, resident and physician.