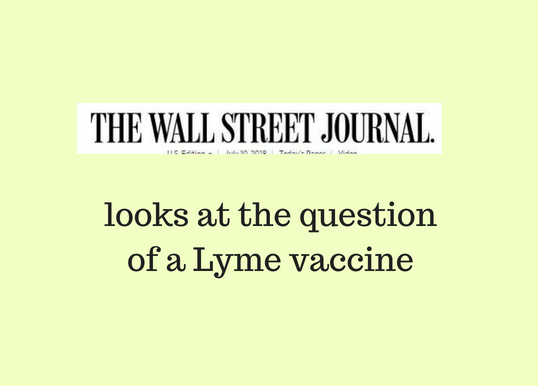 I have mixed feelings about the following article in the Wall Street Journal this week: “The Effort for Lyme Disease Vaccine Draws Early Fire.”

To her credit, reporter Sumathi Reddy did include comments from two major patient advocacy groups, LymeDisease.org and the Lyme Disease Association.

That’s a welcome change from the way national media outlets have traditionally approached such topics.

Often, they present only one side as having valid concerns—the big boys from IDSA and/or Big Pharma and/or CDC. And completely ignore the fact that there even IS another side, or give it only a token mention.

Reporter Reddy still allows vaccine interests to set the tone of her article.

Here’s how it plays out. She gives a brief overview of what Lyme disease is and how the French company Valneva SE is in the process of bringing out a new Lyme vaccine. So far, so good.

Then she lays out this whopper, as a statement of fact:

Say what? Lyme patients are a “powerful lobby”? Let’s put that statement in perspective, with some data from OpenSecrets.org, which tracks payments by and to lobbyists.

The Infectious Diseases Society of America (IDSA)—the folks whose Lyme guidelines make it impossible for many Lyme patients to get properly diagnosed and treated, and who are on record as supporting a Lyme vaccine—spent $4.1 million on Washington lobbyists from 2013-2017. That’s a strong lobby.

You know how much Lyme patient advocates spent on Washington lobbyists during those years? A big fat ZERO.

Let’s go back to that line in WSJ again:

Let’s rephrase that a little more accurately: “Consultants on the payroll of vaccine interests have decided to paint Lyme patients as the villains in the LYMErix debacle. Because that suits their purposes better than admitting they had a problematic product that caused injury to hundreds of people who took it.”

For a clearer picture of what happened with LYMErix, read the following comments submitted by Dr. Ray Stricker to the federal Tick-Borne Disease Working Group: Lyme vaccine failed because safety was ignored.

Now, back to that sentence, with the troublesome portion removed:

“The last Lyme vaccine that came out had significant safety concerns,” says Lorraine Johnson, CEO of LymeDisease.org, a nonprofit patient advocacy group. “The feeling in the community is that whoever is going to be putting together [a vaccine] ought to be dialoguing with the community and ought to be transparent about the process.”

Ticks can cause co-infections and other diseases and the vaccine may offer a false sense of complacency, she says.

“We don’t feel that there has been enough research done to answer the questions as to what occurred with the prior vaccine,” says Patricia Smith, president of the Lyme Disease Association Inc., a New Jersey-based national nonprofit group, which raises money for Lyme research, education and patient support. “The vaccine that is now in development is something with the same base. There were a lot of patients that thought they were harmed from that vaccine. It’s very problematic.”

Then, the reporter counters those statements with this: “Many doctors and medical experts say there was never any evidence that the old vaccine caused serious side effects.”

Yet, what about the FDA’s 2001 Safety Data Report for LYMErix, which stated that there were 1,048 reports of injury following the vaccine, including four deaths, and 85 “serious” events? (These were defined in the report as “hospitalization, prolongation of hospitalization, disability, or a life-threatening illness.”)

For several years now, there has been what might be called a “disinformation campaign” (false information intended to mislead) regarding the LYMErix experience. It has been repeated in otherwise credible news outlets many times and goes like this: LYMErix was a perfectly wonderful vaccine, unfairly driven from the marketplace by ignorant, anti-science—but politically powerful—Lyme patients.

And stories that propagate such an inaccurate picture never drill down to the fact that the LYMErix people have never come clean about what really happened. As Dr. Stricker noted in the comment I linked to above:

“In reality, the vaccine was pulled off the market to avoid disclosure of Phase IV data that probably would have shown limited efficacy and significant safety concerns related to LYMErix. That data has never been publicly released.”

So back to those mixed feelings about this article. I’m glad the Wall Street Journal cared enough about the issue to at least contact patient advocates for a comment.

I wish the reporter hadn’t taken the vaccine apologists’ view of things at face value, though, and had dug a little deeper into what actually happened with LYMErix.

About that “powerful lobby”

And another point. If we really had the superpowers that the other side falsely ascribes to us, don’t you think we’d fix it so people with Lyme disease would have access to the medical treatment they need to get well?

Instead, the current system denies diagnosis to many people in the early stages of Lyme, when treatment is most effective. This creates more cases of chronic Lyme disease–which the system then denies even exists.