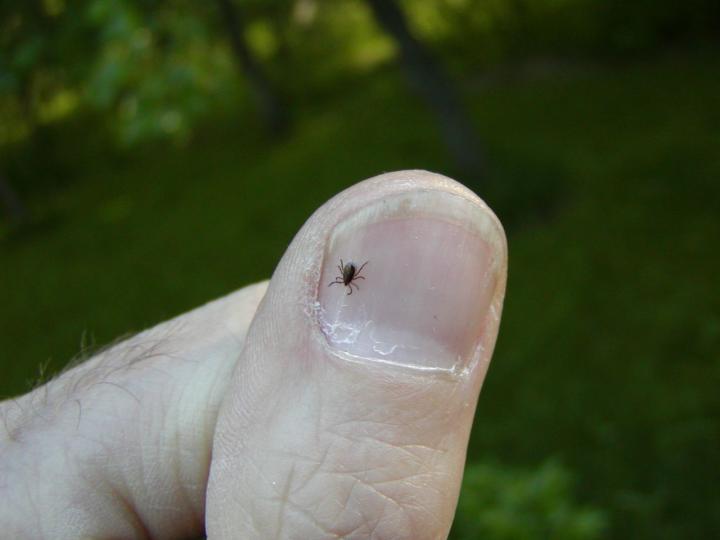 “Results suggest that significant climate warming may reduce risk of anaplasmosis and the Powassan virus, but increase Lyme disease risk.”

Press release from the Cary Institute of Ecosystem Studies, Feb. 18, 2015

In the northeastern United States, warmer spring temperatures are leading to shifts in the emergence of the blacklegged ticks that carry Lyme disease and other tickborne pathogens. At the same time, milder weather is allowing ticks to spread into new geographic regions. Findings were published this week in a special issue of the Philosophical Transactions of the Royal Society B dedicated to climate change and vectorborne diseases.

Conclusions on blacklegged tick emergence were based on 19 years of data collected at the Cary Institute of Ecosystem Studies in Millbrook, N.Y. Located in Dutchess County, the 2,000-acre research campus sits at an epicenter for tickborne disease. Cary Institute ecologist Dr. Richard S. Ostfeld and his team have amassed one of the most comprehensive field studies on how environmental conditions influence vectorborne disease risk.

Ostfeld, a co-author on the paper, comments, “Nearly two decades of data revealed climate warming trends correlated with earlier spring feeding by nymphal ticks, sometimes by as much as three weeks. If this persists, we will need to move Lyme Disease Awareness Month from May to April.”

Risk of tickborne illness is shaped by complex interactions among pathogens, ticks, and host animals. Take the case of Lyme disease: blacklegged ticks acquire the bacterium that causes Lyme when they feed on small mammals that harbor Borrelia burgdorferi. Ticks seek a single blood meal at each life stage: larva, nymph, and adult. Larval ticks are born free of the Borrelia bacterium. Tiny infected nymphs pose the greatest threat to people.

Dr. Taal Levi of Oregon State University led the emergence analysis; he performed the work while a postdoctoral associate at the Cary Institute. Levi explains, “Understanding when ticks are active, and at what life stage, is essential to predicting tickborne disease spread. Pathogens that cause a lasting host infection, such as the Lyme disease bacterium, benefit from a lag between nymphal and larval feeing. The same might not be true of other pathogens, like Powassan virus, that are transmitted when larvae and nymphs feed simultaneously.”

Using observations on more than 53,000 mice, 12,000 chipmunks, 403,000 larval ticks and 44,000 nymphal ticks collected in the Cary Institute’s forests, Levi, Ostfeld, Dr. Felicia Keesing of Bard College, and Cary Institute senior research specialist Kelly Oggenfuss unraveled how climate shaped the timing of tick lifecycle events. Nymphs peaked in the spring and larvae in the summer. Both larval and nymphal ticks were found to emerge nearly three weeks earlier in warmer years, but there was little evidence of larval and nymphal peaks either converging or diverging.

When fall temperatures were mild, a smaller percentage of larval ticks entered dormancy and waited until spring to feed. If these trends continue as the climate warms, asynchronous patterns of larval and nymphal tick emergence in northeastern North America are likely to persist.

Levi notes, “Results suggest that significant climate warming may reduce risk of anaplasmosis and the Powassan virus, but increase Lyme disease risk, particularly in the Upper Midwest where tick feeding patterns are likely to become more asynchronous.” With Ostfeld emphasizing, “Here in the Northeast, warming is already having an effect, and people need to be tick-vigilant before May, as potentially infected nymphal ticks are searching for their blood meals earlier and earlier.”

The second study, co-authored by Ostfeld and Dr. Jesse L. Brunner of Washington State University, reviewed scientific studies of how climate warming influenced the distribution of ticks. Efforts focused on Ixodes ticks, which are vectors of many human pathogens in addition to Lyme disease bacteria. These ticks spend much of their lives on or near the ground and appear limited by cold winter temperatures.

Clear evidence was found that warming is expanding Ixodes populations to higher latitudes and altitudes, but more work is needed to understand why ticks in different regions appear to be constrained by different environmental influences.

Ostfeld concludes, “Forecasting how climate change shapes tickborne disease risk requires taking a suite of factors into consideration, among them habitat loss, urbanization, and movement of people and animals. We are making inroads, but protecting public health will require investment in multidisciplinary, collaborative work that takes advantage of new technology and modeling approaches.”

Research for the emergence study was made possible by the National Science Foundation, the U.S. Environmental Protection Agency, and Dutchess County, NY.