Precisely how do ticks ambush you–and give you Lyme disease? 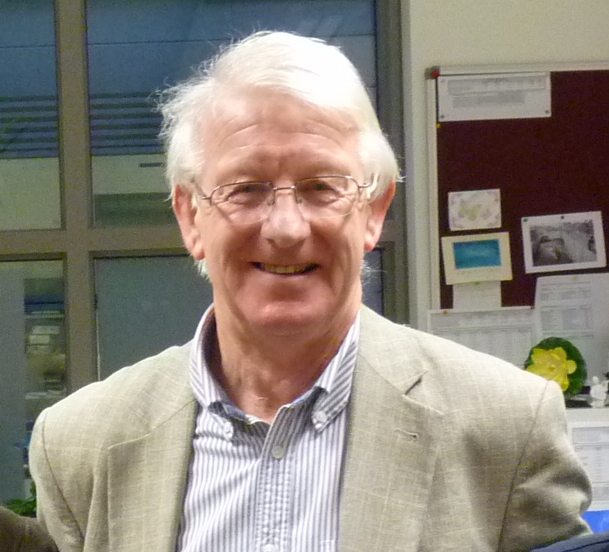 John Eoin Healy, PhD, now retired from University College Cork, Ireland, has been researching tick biology for over 40 years. In the following article and video, he explains how questing ticks make contact with unsuspecting people and animals.

Various estimates indicate that up to 60% of people who contract Lyme borreliosis (Lyme disease) have no recollection of being bitten by a tick.

For those concerned about Lyme disease risk, it may be useful to explain how ticks make contact with and attach to host animals i.e. birds and mammals, including unfortunate humans.

The species of tick that transmits the Borrelia bacteria that cause Lyme disease are Ixodes ricinus in Europe, and Ixodes scapularis and Ixodes pacificus in North America. These ticks thrive in areas with woodland or heavy vegetation which provide the cool moist conditions that these ticks need to survive.

Their second vital requirement is a sufficient number of host animals (deer, cattle, sheep, goats, small mammals and birds) to ensure that ticks have hosts on which they can feed (that is, suck blood) and then reproduce. Increasing numbers of host animals such as deer will accelerate the growth of tick populations.

At the risk of stating the obvious, ticks are wingless and therefore cannot fly. Neither can they run or jump. The species of tick that transmit the Borrelia bacteria that cause Lyme disease move very little laterally on the ground, that is, in the horizontal plane.

When a blood-fed larva (the first active life stage) drops from the skin of a bird or mammal, it moves directly downwards with the prospect of finding humid vegetation. There, it undergoes digestion and it moults into the next active life stage, the nymph.

If the larva happens to drop from its host onto a dry path or other unsuitable terrain, then it will most likely desiccate and die.

In the event of success, the emerged nymph will begin to seek a host. It does this by climbing vertically on whatever vegetation happens to be in the immediate vicinity.

Sometimes one may hear someone say, “Long grass is the only place you will find ticks” or, “Stay away from ferns – always ticks there” or some such warning, as if ticks choose the vegetation that they will climb. Ticks have no say in the matter – they simply climb whatever vegetational structure is available to them at the location that the previous life stage dropped from its host.

The behaviour and movements of host bird and mammal species dictate where ticks are deposited. So, a blood-fed larva will give rise to an emerging nymph, and a blood-fed nymph will produce an adult male or female. And of course, a blood-fed female will produce up to 2,000 eggs from which larvae will hatch.

I have conducted mass releases of paint-marked adult ticks in a prepared “arena” in a woodland clearing and then observed what happened. I found that the vast majority of individual ticks moved less than 2 metres from their release point, although a small number managed to travel 4 to 5 metres within 4 days.

The most interesting finding was that the majority of ticks somehow managed to locate vertical vegetation to climb within a short radius from the point of release.

Ticks have a finite fuel supply 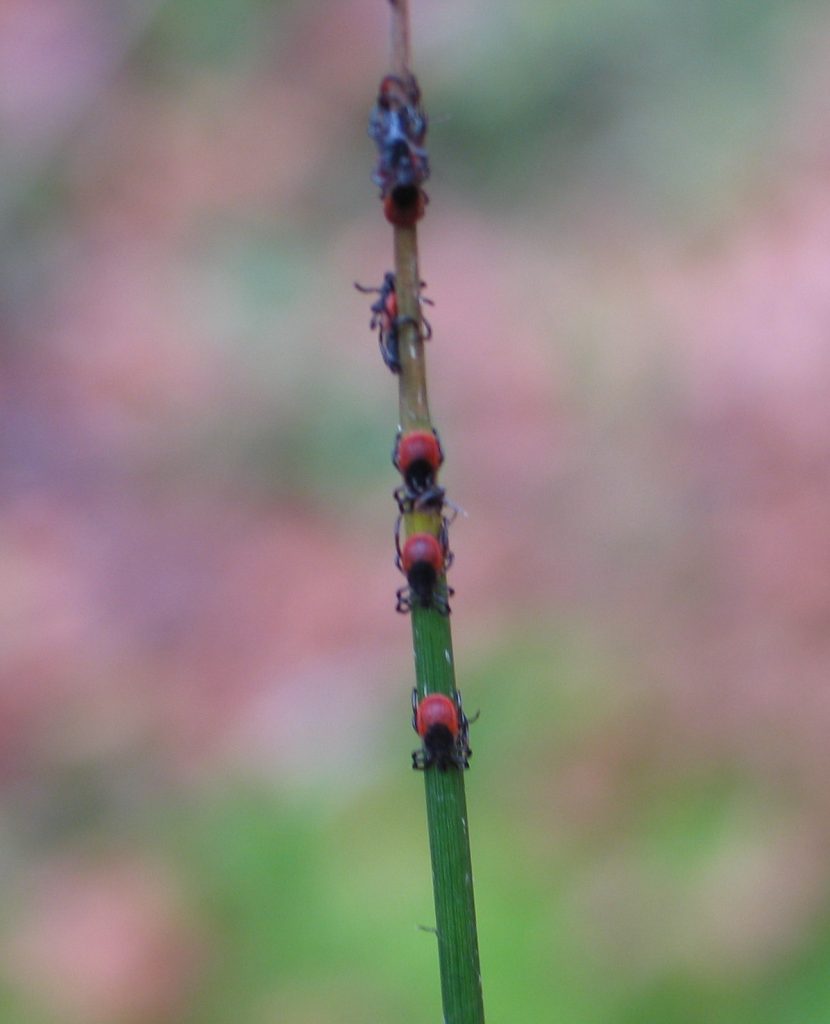 Ticks waiting for a host to appear.

Ticks limit their horizontal movement for a very good reason – an economic one. A blood-fed larva that drops from a host has a finite energy supply of fat. Think of it as a full fuel tank. The more a tick moves, the more fuel it burns.

If it runs out of fuel before making contact with a host, then life ends for that particular tick. So, ticks have evolved a strategy to conserve their energy supplies by minimising their movement. They climb vertically and wait … and wait … and wait.

Usually, they will position themselves at or close to the tip of a structure, whether it be a leaf, twig, bracken, grass or rush stem. Ticks can be found on vegetation from a few centimetres to almost 2 metres above ground level. When no hosts are nearby, ticks can assume a resting or “quiescent” position with front legs folded.

In the event of ticks becoming dehydrated, they will move downward into the moist vegetation mat to replenish their bodily water content, before climbing vertically once more. 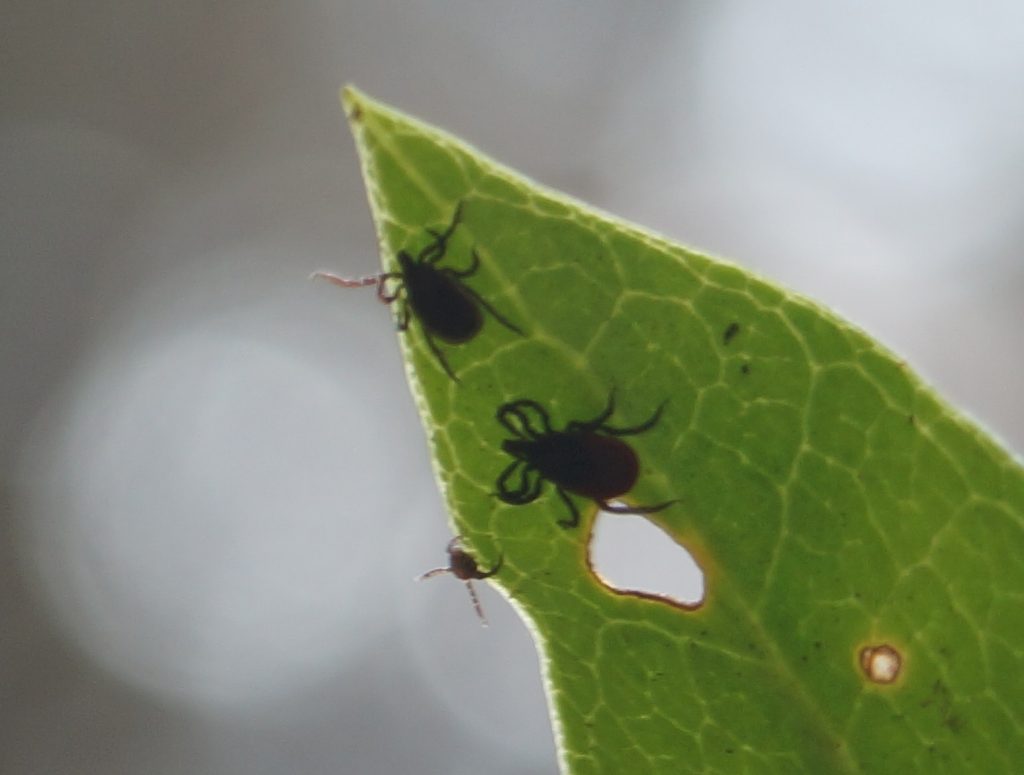 Image shows a nymph and an adult female questing – front legs extended and raised. Another female is in the quiescent pose.

Ticks can detect the presence of a potential host by temperature, carbon dioxide and by various odours released from the skin of the host. Each of the front pair of legs has a specialised organ which is loaded with sensory cells for this purpose.

Once a tick detects the presence of a host animal, its behaviour changes. It will begin to move and adopt what is termed the “questing” pose.

A questing tick waves its front legs about as its scans the local atmosphere. It is most likely that it has the capability to determine the direction and distance from the approaching host although this has not been proven.

In a video clip which I shot in an infested woodland location, you can see how easily an adult female tick latches onto my finger.

The tick was initially in a quiescent position (saving energy) until I began to move my hand close to the rush stem on which it sat. Sensing my hand, and therefore a possible blood meal, it begins to quest as the video shows.

Note the ambushing strategy that this species has evolved – it doesn’t hunt its victim, it waits for the victim to pass close by. The smaller nymph behaves in exactly the same way.

I focused on an adult female for this video rather than a nymph simply because its size made it easier to capture on camera.

The video shows how easy it is for a tick to “jump on board” a passing human. The slightest brush of a hand, arm or leg against infested vegetation is all that is necessary.

Of course, ticks will also cling onto clothing and burrow through to the skin where they will penetrate and begin to suck blood. Bare wrists, arms and legs are the most vulnerable body parts so there is very good reason to use an appropriate tick repellent on these areas.

Light-coloured clothing makes visual detection of ticks much easier. And it is very important that clothing should be of a close weave as ticks will find this much more difficult to penetrate. I would also recommend that socks and walking boots/shoes be sprayed with repellent.

A note on adult and nymph ticks

The Ixodes ticks species that transmit Lyme disease have three active life stages – larva, nymph and adult. The general view among Lyme/tick specialists is that larvae carry very little Borrelia and so present a minimal risk to humans. Adult male ticks do not feed and so cannot transmit bacteria.

Nymphs pose the real threat. An unfed nymph is approximately 1.5 mm in size and weighs around 0.2 mg. In contrast, an unfed adult female can be 3.5 mm in length and 2 mg in weight – 10 times the weight of a nymph.

A person is much more likely to see and feel an adult tick on the skin than detect the smaller nymph. And once a tick has attached and has begun to suck blood, the smaller nymph may remain undetected for long enough to pass Borrelia into the unsuspecting victim. And of course, the small physical size and weight of the nymph explains why so many Lyme disease victims cannot recollect being bitten by a tick.

Dr. Healy’s expertise lies in the area of tick ecology, genetics, behavior and Borrelia infection rates. He has published in all of these fields. Click here for a list of his publications.