THE LYME TIMES: A Feeling for the Organism 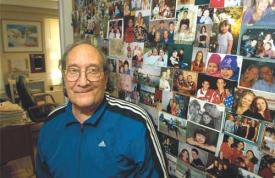 “Had we listened to our pediatrician and the local Lyme disease expert, we might have stuffed him full of psychoactive medications unable to address the disease. It would have been tantamount to locking him up and throwing away the key,” Elizabeth Stone said. Luckily they found Dr. Jones and her 16-year old son made a near-miraculous recovery.

A Feeling for the Organism, Part 2 of 7

It was in March of 2000 that Elizabeth Stone (not her real name) of northern Westchester county, New York, finally left her job to hunt, full time, for treatment for her 16-year-old son’s “mystery” disease. Resident of a community at the epicenter of Lyme disease reports, with a house abutting a rare spruce forest filled with deer, Stone had first observed a strange, mottled rash on her son’s torso in October of 1998. She called her pediatrician, a member of the largest and most respected medical group in her part of the county, asking whether she should come in. “No, don’t bother,” she was told. In the months that followed the boy proceeded to develop a host of disturbing symptoms: first a severe flu-like illness, then aches in his knees and elbows, finally, an unremitting migraine and marked nausea that never went away. Though Stone requested the doctor perform a Lyme disease test, he insisted the symptoms, in aggregate, were too broad and vague to suggest something like Lyme.

As Stone traveled from specialist to specialist, including rheumatologists and infectious disease experts at the major teaching hospitals of Manhattan, she was given a variety of diagnoses questionable diagnoses from depression and stress to Parvo virus to unending, unrelenting “flu.” Stone was fortunate in that her son’s psychiatrist, a renowned expert in his own right, did not buy the ‘psychiatric’ diagnosis favored by the pediatrician or the neurologist brought on board. Responding to the psychiatrist’s demand for more lab work, the primary care pediatrician, finally, reluctantly, drew 14 vials of blood. “We are testing for every disorder possible, just to make you feel better, even though there’s nothing wrong,” he told Stone at the time. But when a Western Blot test revealed 8 positive antibody bands for Lyme disease – the Centers for Disease Control and Prevention (CDC) requires five –  the pediatrician still refused to concede Lyme disease was the cause.

Instead, he sent her son on to yet another referral, this time the head of infectious disease at an area hospital. That doctor, well known in the community for his view that Lyme was overdiagnosed, nonetheless agreed Stone’s son had slipped through the cracks. The boy had been infected for a year or two, the doctor said, and prescribed four weeks of intravenous Rocephin to treat what he said was now a neurological disease. But when, at the end of the month, the teenager was sicker than ever, that doctor pulled back, too. There was nothing more he could do for the boy, he said – if the treatment hadn’t worked, if the boy was still sick, whatever it was, it wasn’t Lyme. He now tended to the psychiatric explanation, too. But what psychic switch had prevented this former basketball impresario and straight-A student from standing or even sitting up in bed; from focusing enough to read a paragraph, let alone a page? What caused him to writhe in pain whenever anyone jostled him, to demand near-darkness to open his eyes, or to appear so contorted he might have been struck by a speeding Mack truck?

These were the issues Stone was grappling with when the leader of a local support group steered her son to Jones. “Dr. Jones tested my son not just for Lyme, but for other tick-borne infections, including ehrlichia and babesia,” she says. “When the results came back, Jones called to tell her the boy was positive for all three. Instead of using more aggressive intravenous treatments, as the mainstream had done, Jones used low-dose combinations of targeted medications: doxycycline to treat the Lyme and ehrlichia, and Mepron for the babesia.

“Within two weeks my boy had gotten off the couch and was throwing a basketball in our family room,” says Stone. A year later, he was well. “Had we listened to our pediatrician and the local Lyme disease expert,” she says, “we might have stuffed him full of psychoactive medications unable to address the disease. It would have been tantamount to locking him up and throwing away the key.” Instead, her son is once more a straight-A honors student on the high school basketball team, with hopes of attending college in the Ivy League.

More harrowing is the story told by Kay Lyon, a mother from Wenham, MA, who describes the decline of her daughter until, in the summer of 1998, she was locked in a pediatric psychiatric unit for three-and-a-half weeks. She had just turned nine. “She was paranoid, delusional, psychotic, suicidal, homicidal, and having visual hallucinations while partially blind,” Lyon explains. “She suffered severe confusion, and pain in large and small joints. Because she could not attend public school she was placed in a ‘behavioral program,’ where she was physically restrained and put in solitary confinement almost daily for three months. There she cried, fought with her very real ogres, screamed, beat on the mat which was used to contain her, and finally would curl up in a fetal ball on the cold floor in the corner and sob. My husband found her in this ‘room’ one day and removed her from the ‘school’ immediately. She then spent three months at home with no schooling available for her at all.”

Saddled with numerous diagnoses, including bipolar disorder, attention deficit disorder, schizophrenia, possible schizophrenia, anxiety disorder, and tentative mitochondrial disease, the child was kept in check through psychoactive drugs like Lithium, Risperdal, Tegretol, Topamax, and Klonapin, which caused the gain of massive amounts of weight and kept her brain in a fog. Lyon was frantic. The child’s IQ had dropped 45 points in six months, and a scan with magnetic resonance imaging (MRI) revealed multiple lesions throughout the brain, predominately in the frontal lobes. “Our child was a patient of 16 doctors,” says Lyon, and “none knew what was wrong.”

Desperately searching the Internet for any clue to help, Lyon worked backward from the list of symptoms, and one condition stood out as encompassing all of them: Lyme disease. “Despite this discovery, “ she says, “it took four months until I could find a doctor willing to diagnose and treat her for this disease. Most refused to even run a Lyme disease test. Then, Lyon found Jones.” The doctor tested the child, finding not just Lyme disease, but also the co-infections Babesia and Ehrlichia. A little more than two years later, Three years later, treated with long-term oral antibiotics, the child has made a near-miraculous recovery. She is now in a normal sixth grader and, according to her mother, “she even has friends.”

“Dr. Jones is an angel, a living saint,” Lyon says to anyone who will listen. “We owe him our lives.”

For more information about Dr. Jones and to make a contribution to help keep his practice open, click here. Come back tomorrow for Part 3.