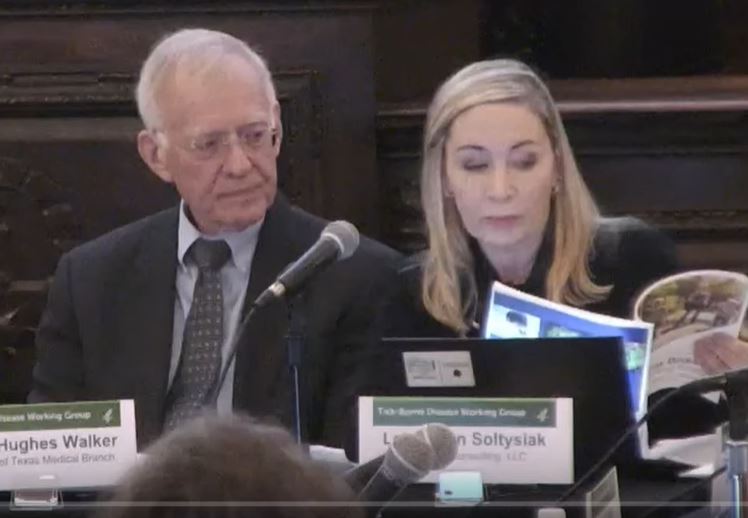 The final meeting of the 2019-2020 Tick-Borne Disease Working Group was held online December 2. The panel’s report should be on its way to Congress soon.

Much of the meeting was devoted to crossing the T’s and dotting the I’s in that report. But, true to form, this meeting was not without drama.

Co-chair David Walker and IDSA representative Eugene Shapiro tried one last time to play fast and loose with the rules regarding “minority responses.” (This is when a panel member disagrees with the majority on a matter and wants to explain why. Kind of like a dissenting opinion in the Supreme Court.)

Minority responses are permitted, but there are requirements that must be met.

Shapiro wrote a response opposing a chapter that means a great deal to the Lyme patient community. But he didn’t want to put his name on it. (Why not, doctor? You wrote it – why keep it a secret?) After some discussion, the panel nixed that idea. The passage in question would acknowledge Shapiro as its author.

Then, Walker wanted to add his name alongside Shapiro’s — so he could also oppose the issues dear to the Lyme community. He said he wanted his name there because he agrees with what Shapiro wrote. The problem with that was that Walker had voted in favor of that section, which put him in the majority. You can only give a minority response if you are in fact, in the minority. So, that got nixed too.

A last burst of nonsense

It was one last burst of nonsense from two Working Group members who seemed bent on undermining the Lyme community at every turn, over the life of this panel.

But the issue is larger than these two individuals.

It started before the first meeting, when Shapiro—who for decades has made a hobby and a vocation out of publicly denigrating Lyme patients and their treating doctors—was named to the panel in the first place. That’s also when HHS decided to appoint only one representative of the Lyme community, when previously there had been three. And to appoint zero ILADS doctors to the Working Group, when previously there had been one.

According to lone patient representative Pat Smith, in her closing comments to the Working Group, this undermining of Lyme patients was a constant throughout the entire term of the panel. She stated:

Since Meeting 1, when Chairman Walker, a Rickettsia expert, announced that Lyme had already been done by the first Working Group, and this Working Group would do a brief update on Lyme and concentrate on other tick-borne diseases, it was clear the patient interests would be targeted. Each meeting the patient chapter was rigorously scrutinized and held to a different standard than the other chapters.

Attempts were first made behind the scenes to allow anyone to write a minority report before any consensus vote was taken, although through a vote, the majority of the Working Group did not allow that to happen. Two weeks ago, the tenor of the report discussion changed to an entire rewrite of our chapter, devolving into a real “food fight.” A motion to keep the chapter as it was, passed 8-6. Three minority reports have been produced for that chapter, including the three government agencies objections, CDC, NIH, FDA.

WHO’S IN CONTROL: The government agencies have been forced to take a public stand against the patient chapter, dismissing chronic Lyme disease and continuing the denial of treatment to sick Lyme patients, alongside their partners in a powerful medical society, one whose new Lyme guidelines were just released two days ago. Their public talk has centered on what is good for the patient, but their decisions do not reflect that sentiment. The question thus becomes, whose interest was this panel designed to serve: those of the patients who for two decades fought to pass the enabling legislation for this panel to help focus on their plight, chronic Lyme disease—or for medical specialty society special interests?

LYME IS MARGINALIZED: Other diseases are treated seriously. HIV researchers developed a gold standard test within a few years, Lyme still has none. Leprosy has had more clinical trials than Lyme disease, which ranks 14th out of 15 diseases in infectious diseases trials. Within nine months, COVID 19 had several treatments, tests and upcoming vaccines. To the Lyme patients, I am so sorry you have been again marginalized by those charged with your health, but we gratefully thank any current Working Group members who worked hard to provide the help you so desperately need. (Read the entirety of her remarks here.)

The Department of Health and Human Services has taken nominations for the upcoming panel, and we’re waiting with bated breath to find out who will be chosen.

Pat Smith served on the first two panels and her time with the Working Group is now over.

She did a remarkable job and the Lyme community owes her a huge debt of gratitude. She not only knows her Lyme stuff, she knows her “Robert’s Rules of Order” stuff, as well as the details of FACA, the Federal Advisory Committee Act, which governs the Working Group.

She kept an eagle eye on what was going on and was not afraid to make some noise when they were not following the rules. Working with other panelists who also wanted to help Lyme patients, she managed to push through a chapter that encapsulates much of what our community wants to see happen.

And, yet, the work is not done. Pat ended her closing remarks as follows:

I leave you all with a quote from the late Issac Asimov, noted author: “Your assumptions are your windows on the world. Scrub them off every once in a while or the light won’t shine in.” These windows haven’t been scrubbed in almost 46 years.

Yes, indeed. Four decades of grime have built up over the assumptions made by the IDSA and its governmental partners regarding Lyme disease. And Lyme patients continue to suffer because of it.

Let’s bring out the suds and the scrub brushes.