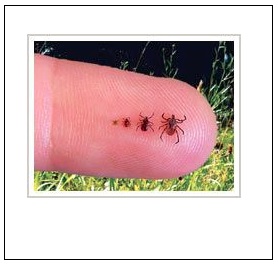 SILICON VALLEY, Calif., Aug. 19, 2015 /PRNewswire/ — Bay Area Lyme Foundation, which is working to make Lyme disease easy to diagnose and simple to cure, highlights a new Bay Area study conducted by researchers from Stanford University and Northern Arizona University documenting a vast diversity of bacterial species and strains that cause tick-borne diseases in Bay Area residents and visitors.  The variety of bacterial species and strains identified may be the reason that Bay Area patients with tick-borne diseases experience a wide range of symptoms, which may or may not include flu-like complaints, joint pain, fatigue and a rash of differing shapes, thereby making exact diagnoses extremely difficult.

“The range of symptoms patients experience compounds the difficulty in diagnosing these patients and is extremely frustrating for both patients and medical professionals,” said Linda Giampa, Executive Director, Bay Area Lyme Foundation, which funded this study and is the leading national funder of Lyme research.  “This research offers some insight into the variety of bacteria that cause Lyme, and we encourage patients and medical professionals to heed this study and be alert to the different symptoms of tick-borne infection.”

The study, published in PLOS ONE, a multidisciplinary, open access, peer-review resource, is the first to demonstrate four key findings:

“We continue to be surprised by the number of ticks carrying Borrelia burgdorferi and Borrelia miyamotoi throughout the Bay Area, and believe more research into the connections between human disease and strains and species of bacteria is critical,” said Dan Salkeld, PhD, a disease ecologist working at Colorado State University and formerly with The Stanford Woods Institute for the Environment. “It was astonishing that we could see such variety in tick ecology, ranging from low tick infection risk on one trail to high tick infection risk on another trail in the same park.”

To conduct this new study, researchers counted and tested western black-legged nymphal ticks (Ixodes pacificus) at various locations within parks in Napa, Santa Clara, San Mateo, Sonoma and Marin Counties.  Nymphal ticks are younger and smaller than adult ticks, but older than larvae, and are active January to October, though most abundant from March to June.

“Because nymphal ticks are even more difficult to spot than adult ticks, they are often considered more dangerous to humans, and–based on these results –we are concerned that the risk of disease these nymphal ticks present in the Bay Area is higher than one would expect,” said Nate Nieto, PhD, Assistant Professor, Department of Biological Sciences, Northern Arizona University.  “Our findings about the risks of infection have increased our curiosity about the interactions between host animals, ecology and human cases of disease.”

The study, “Disease risk & landscape attributes of tick-borne Borrelia pathogens in the San Francisco Bay Area, California,” can be found at http://dx.plos.org/10.1371/journal.pone.0134812.

“Knowing the possible symptoms of Lyme disease and that you can have Lyme disease even if you don’t get the bull’s-eye rash is critical for residents,” added Giampa.

About Lyme disease
One of the most common infectious diseases in the country, Lyme disease is a potentially debilitating infection caused by bacteria transmitted through the bite of an infected tick to people and pets. If caught early, most cases of Lyme disease can be effectively treated, but it is commonly misdiagnosed due to lack of awareness and unreliable diagnostic tests. There are about 300,000 new cases of Lyme disease each year, 10 times more than previously reported, according to statistics released in 2013 by the CDC. As a result of the difficulty in diagnosing and treating Lyme disease, as many as one million Americans may be suffering from the impact of its debilitating long-term symptoms and complications, according to Bay Area Lyme Foundation estimates.

About Borrelia miyamotoi
Borrelia miyamotoi is a spiral-shaped bacteria transmitted by ticks, and causes tick-borne relapsing fever (TBRF) in humans. It is among the nearly 20 tick-borne pathogens known to be present in the US.  These spiral-shaped bacteria are similar to the bacteria that can cause Lyme disease, and symptoms can sometimes be similar. Symptoms of TBRF include fever, chills, headache, body and joint pain, fatigue, and very rarely, a rash.